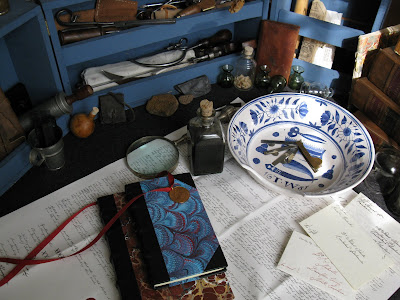 Unfortunately this evening about five o'clock while the people were reefing the topsails, (a) block strap of the maintopsail gave way and by the sudden driving threw several of the people off the yard. They all got into the top with little damage unless the poor man whose case I am now detailing. He fell down on the quarter deck, (there being no splinter netting in this ship which would have saved Him) near the Sky Light. Both thighs and the left arm were badly fractured. The left thigh was a compound fracture; about three Inches of the femur was propelled thro' the instrumentson the outside nearly about midway between the knee and head of the femoris. This portion had ruptured the femoral artery and dreadfully lacerated the contiguous muscles and by the violence of the fall was left sticking upwards of an inch and a half in the deck it was afterwards dug out with a mallet & chissell. As soon I accurately ascertained the extent of the of the injury he received, with the assistance of Mr. ___________, we proceeded to take off the left thigh and then replaced the fractured ends of the other thigh and left arm with proper Bandages & splints. From the time he fell he never spoke; but he was apparently quite sensible. We got him to bed and exhibited a cordial draght, but his pulse gradually sunk and he expired almost imperceptibly at nine o'clock. He lost a good deal of blood before the operation from the artery being wounded but not so much as to endanger life. -- The Injurys he had sustained independant of concussion rendered his case a hopeless one.