After my Letter of Temporary Transfer of March from this Present Year, the time has seemed to pass very quickly. I have packed my things and am preparing to report to Navy Hall in York, Upper Canada and then be transferred over to the Pathfinder.

The Pathfinder is to be part of His Majesty's squadron that shall consist of the Pathfinder herself, her sister ship the Playfair, St. Lawrence II, Caledonian and the La Revenante. The Commodore’s own Broad Pendant will be hoisted in the Squadron flagship, Fair Jeanne.

I have since discovered that my own Captain Freymann is to be part of the squadron as well aboard the Playfair! It gives me every confidence in the mission with Robert Freymann added to the group. We will travel to Navy Hall separately, but arrive at roughly the same time to take part in the coming assault.

In an effort to disguise myself whilst traveling overland through what has become 'enemy territory', I shall be disguised as a common sailor. I am especially grateful to Lt. Ramsey for the loan of the slops, as I did not have any of my own to make use of. So long as I am not detained and a close examination made of the state of my hands… and no one asks me about ropes, knots and sailor jargon… I should fare well.

I beg that you and the other Acastas think on me with gentle regard, and know that I most sincerely wish you all health and success; and am, with great respect, dear Friend,

The Ships of the Squadron 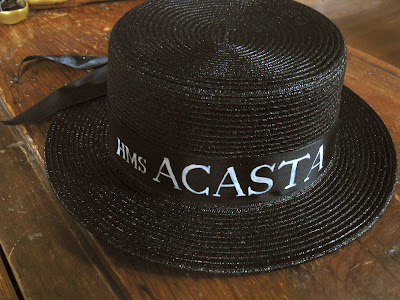 All Navy men are cordially invited to join the crew of the HMS Acasta as they celebrate the life and victories of Lord Nelson at a fine meal in his honour!

To be held at:

All attendees please bring one 'Navy themed' food or drink and dress in your Navy fines. Attendees should RSVP on the page designed for that purpose by selecting the link below: