The following letters come from my recent personal correspondence concerning a matter of book-binding. 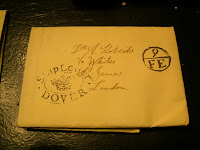 I am about to deliver up the "Naval Surgeon" to the printers. I have found a replacement for Plate VI. Amputation Instruments. When I was about to embark upon Plate V. Trepanning Instruments, I happened upon the very same in your published works on your adventures aboard HMS Acasta. So to the question. Is it possible to get a [finer] copy of this plate? It will certainly be easier to complete the work in question. Your assistance would be most helpful.

There is not any particular rush, as these plates will be inserted after binding.

My dear Lt. S---------,
I bring you greetings from the North American Station. I am always gratified to receive mail from my fellows, especially in this cold and dreary season of the Year.

As to the plate in question, I am afraid that I do not have a larger version of the image of the Trepanning tools. I have also performed a search for such with no luck. Do you not think that your printer might be able to make due with my version? It is my understanding that if the book itself is not too sizeable and the image does not have to be enlarged to fit upon the page, it may just suit the purpose.

Additionally, should the plate be reduced in size to fit upon the page, there would be no loss of detail would there? Of course, I shall leave it to you, as your knowledge in this matter will naturally be greater than my own, as I do not have the book in my hand to reference for such details.

I am quite in your debt for the printing and binding of the volume in question, it shall be a fine addition to my little medical library here. Are you certain there is not some way for which I might repay you for the book? Perhaps there are some papers I might be able to draw up for you? I have been called upon once or twice to ply my pen in the service of my fellow men, with admirable results.

It is my sincere hope that this missive finds you well and the Acastas here join with me in presenting their best compliments to yourself and Crew. If, in your affairs here, I can render you any acceptable service, I beg you will use that freedom with which I wish you to command, dear Sir,

Your affectionate and obedient servant,
Dr. A. Roberts

N.B. Whenever your leisure will permit, it will always give me the greatest pleasure to be informed of your welfare. 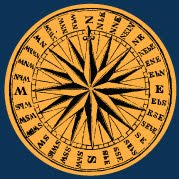 Observant readers might take note that I have made a slight modification to the Ship's Log. It should not offer you any trouble in the changing.

If you cast your eye to the right of this page, you'll discover the section entitled "Logs by Author/Assignment".

You may select more easily from here whose logs you wish to read. Additionally, you may now select to read all of the logs from a particular mission. For example, Lt Ramsey and I are only recently returned from a covert mission in the Indiana Territory. If you wish to read all the related log entries, you have but to select 'Mission 1'.

I have no doubt that there will be more 'mission entries' to come.

*These figures do not include 'Prize Money'.

Whilst cleaning out a desk drawer a few days ago, I discover'd the old letter of introduction writ for me by the hand of my captain aboard the Zealous. Along with it was the medal for my service at the Battle of the Nile, for which my friends are always desirous to have an antic-dote. 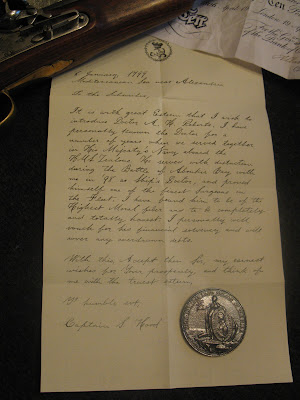 To answer the initial question I am oft asked, No, I was not fortunate enough to meet Lord Nelson. Everyone seems to have the impression that if you served at the Nile, you were shoulder to shoulder with the man himself for the entirety of the action. Far from it, I am afraid I never laid eyes upon him, except perhaps from afar.
As a surgeon, during the heat of the action I was always below deck tending the wounded. I can tell you, it was all shouting, everyone was shouting, and smoke and fire and blood, so much blood. I recall the great crack and cheer that signaled the falling of the Guerrier's foremast could be heard belowdeck. I remember Cuddy staggered down into the cockpit when the noise above decks had ceased. He was covered from waist to foot in blood... "You are undone!" says I.
Cuddy was not his jovial self that day, instead soberly says, "Tis not my blood I wear Doctor."
The Zealous was fortunate in that she and her crew did not receive the number of casualties of the other ships of the British force.

It is a gruesome tale and not one I wish to recall.

WHEN I was two and twenty years of age, in the Year of our Lord Seventeen hundred and Ninety Eight, I was accepted as a Ship's Surgeon aboard the HMS Zealous, a 74-gun ship of the line, under Captain Samuel Hood.
While aboard, that first year I met and befriended Midshipman Thomas Cuthbert... those of the Midshipmen's berth all called him 'Cuddy'.

Cuddy was a most amiable fellow, well read and quite proficient as an officer, we were even about of the same age. He could laugh at nigh anything. There was nothing that he could not gamble on, he must have lost three years wages over the course of our service together. And a stout lover of mirth and good liquor.

He was every bit the spitting image of Thomas Rowlandson's vision of a midshipman circa 1799, he even had the long golden locks.
I RECALL once while in a foreign port, we were both quite in our cups. Cuddy and I sang the night away playing cards and gambling in a nearby tavern. I won four if HIS pounds that night...
Cuddy became so intoxicated that I had to carry him on my back to return us both to the ship. On the way, I lost my footing and staggered, tumbling into the gutter. We both had bits of filth in our hair and on our faces, and I completely ruined the sleeve on my nice blue jacket.
The splash in the face was just what Cuddy needed, and he woke up laughing. I implored him to rise, and together, we made our way back to the docks.
We eventually made it back to the ship via long boat, stinking of alcohol and the gutter. The Captain stopped us before we could attempt to climb up the side, claiming he could smell us from shore. Says he, "What has become of your cloathing Gentlemen?"

I, being the more sober of the two, called up the side, "We met with a bit of misfortune in town, and had a spill in the gutter Sir."

"You gentlemen may not board until you've had a bath to wash off the stink." Captain Hood exclaimed.


Cuddy, who was always very obliging, immediately stripped naked and dove into the water there by the ship. What could I do but join him? And do you know, Captain Hood even had the bosun throw down a bit of soap to aid in the process.
Ah younger days!

From the Medical Journal 6 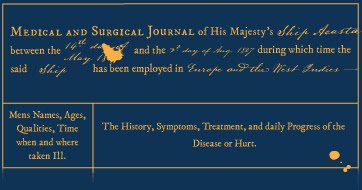 A young sailor, about twenty years of age, in running hastily out from below deck, struck the crown of his head with great violence against a beam. -- He was stunned with the blow, but after a few minutes, was able to go about his business, and continued apparently well for three or four days, when he complained of a giddiness and pain in his head, attended with a slight fever. Under these circumstances, I was applied to for assistance, and, after enquiring into the history of the case, and examining his head, where no appearance of contusion was observable, I took sixteen ounces of blood from his arm, gave him a gentle purge, and ordered a low diluting diet, which soon removed all his complaints, and he continued perfectly easy for ten or twelve days, and were as speedily relieved by the same remedies.
--- In short, he continued to suffer attacks of pain in his head with a fever, every twelve to fourteen days for near three months, and was often relieved by gentle evacuations, until the eightieth day from the accident, when he suddenly became perfectly frantic and delirious, with a hard quick pulse, and most of the symptoms usually attendant on an inflammation of the dura mater.
---A copious bleeding, and several glysters afforded him very little relief, and as his situation was then to the last degree threatening, I was induced to examine the scalp with great attention, and thought I was sensible of some small degree of thickening on the part, where he first struck his head, and which he always pointed out, while sensible, as particularly painful :
Upon this I made two semi-circular incisions, and removed a sufficient portion of the scalp, with the pericranium, which adhered pretty firmly ; --- then perforating the bone, and taking out a circular piece, I was suprized to find only a slight degree of inflammation upon the dura mater, which I immediately divided with the point of a lancet, but without any discharge of blood or matter ;
---- all his dangerous symptoms disappeared the next day, returned no more, and he was cured in the usual time, without any other remarkable circumstance.

Taken mostly from "Plain concise practical remarks on the treatment of wounds and fractures" By John Jones, M. D. Published in Philadelphia: Printed and Sold by Robert Bell in Third Street, 1776
Enter'd into the log by HMSAcasta.com No comments: