Noon sighting place Acasta 43˚ 48’ N 59˚ 46’ W. We passed to the east of Sable Island.
Sky is bright, winds fair and steady from the NNE and a moderate chop on the sea.
Being my first log in ten days due a bout with the bilious fever and the Doctors ministrations I am happy to note that my health is fully restored.

I am also pleased to report that in my absence from duty the Doctor and the Lieutenant were indeed able to work their way back to the coast and ignite the luminary directing our boat to the rendezvous point. Both gentlemen are safely back on board and performing their duties. The Doctor, having been absent from his surgery, approached my recovery with the utmost zeal and fervor to the point that I have developed a great resolve to remain healthy.

The ships stores remain in excellent condition in consequence of our re-provisioning in Halifax. Acasta state of repair is also excellent form same visit as above. 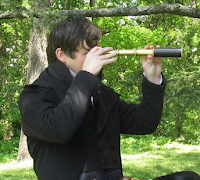 After the long trip back from the Indiana Territory, Lt. Ramsey and I have returned to the coast where we were instructed to signal the Acasta. We got there earlier in the day than expected, several hours before the pre-set time, so we sat on the coastline and watched the ships moving up and down through our scopes.
At noon, Lt. Ramsey thought he espied the Acasta, and told me to have a look to confirm it before we set up the rocket. I used my new scope, and with its greatly enhanced magnification over my older scope, I was able to pick her out instantly, I could nearly make out the individual men on deck!
Lt. Ramsey got the rocket out of the pack and we set it at an angle to send it out over the water where it might be seen by those aboard with the greatest ease. We lit it and sent it on its way, there was a great red conflagration and then the flare fell slowly to the sea.

A Report from the Field Conclusion

Not to belabour the issue, but t'was at this point that we KNEW who had the packet of papers, but simply did not have enough information to fetch him, not knowing what he looked like. And Sgt. Baker was too well protected by the men of the rifle company, who had been warned to keep him from us.

Thus, one might say that our mission was partially successful, in that, we discovered the name of the American Spy, but were unable to retrieve the stolen documents.

So ends our after action report.
Signed and dated this day by our hands.

A Report from the Field Part 5

After drinks at the Harmon Estate, we returned to the Ordinary to take rest for the evening.  The next morning we returned to our chase with a renewed sense of determination.  Believing that our best chance of taking this Sgt. Baker was to ensnare him in a trap, we approached the 95th Rifles in order to enlist their assistance.  Upon speaking with their Captain, it was determined that Lt. Lynch was to gather a small volunteer force to first capture the courier and then we would use her, under threat, to help capture Sgt. Baker.  We hoped that we would also collect our double agent in the capture of the courier, in order to keep suspicions down and use her to pass the courier’s message to the American spy.  Unfortunately, our agent was not with Ms. Waterman, but Mrs. Cooper, the wife of one of the American Riflemen, was.
Having captured the courier, we reset the trap for Sgt. Baker.  Seeing that Mrs. Cooper would be unwilling to serve the same purpose as our agent, we decided that our only course of action was for one of us to stay and lead the ambush and the other to see if he could somehow bring Sgt. Baker out of the American camp.  The Doctor to stayed with the 95th Rifles and I should escort Mrs. Cooper back to the American camp hoping perhaps by pressing Mr. and Mrs. Cooper we would be able to at least give a face to the American spy.  In the enemy camp, Ms. Cooper did everything in her power to show her distress and raise the alarm.  I attempted to pull Mr. Cooper aside in order speak with him but an impertinent private among their ranks interrupted us.  Words were exchanged between the private and I as angers arose and characters were questioned.  On the verge of demanding satisfaction, the private apologized after seeing my commission.
Before the situation could deteriorate any further and I could be clapped in irons, I decided that it would be best to return to the Doctor’s position in the town, as I had not declared formal parlay upon entering their camp.   When I returned to the town the men of the 95th Rifles were recalled with a reported of Action being soon at hand.   Crestfallen we were forced to re think our strategy.

Enter'd into the log by Michael Ramsey No comments: