From a Recent Talk

Exerpts from a recent talk given by the Acasta's Surgeon to the Ladies and Gentlemen of the Louisville, Kentucky chapter of the Jane Austen Society of America. Discussions include the Battle of the Nile and the song 'Heart of Oak'.

Images of Life at Sea 8

Email ThisBlogThis!Share to TwitterShare to FacebookShare to Pinterest
Labels: Images, Miscellany, The Doctor

As it seemed that there would be a good deal of time before we would be able to intercept the American privateer, whose identity it would seem was generally believed to be Young Teazer, the order was given for hands to breakfast, I went below and Vasserman brought me coffee. Afterward, Reid and I made morning Sick Call at the mainmast.

We treated the number of ulcers and bruises to be expected from a crew so long exposed to the elements and the wet. The saltwater and handling of coarse rope is hard on the hands and feet of a sailor. The effected men formed a line for their treatments, but all eyes were distracted by the sails on the horizon as we went about our work.

"She can't be caught that one." said Mr. Rutherford as he stepped forward, hands held out to expose his neglected sores.

"What's that?" asked I looking up from my chest, removing the bottle of salve.

"The Young Teazer that is Sir," says Rutherford, "she's crafty, raised our own colours in Halifax Harbour to escape capture, they didn't even know she was there 'til she was long gone. She'll not be taken easy."

"Mister Rutherford," answers I, "I'm certain the Captain would not appreciate such stuff and nonsense. Regardless of who she is, it is only a ship, and any ship can be captured if pursued long enough by the right Captain." 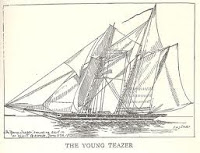 "Oh yes sir, I didn't mean no disrespect to Captain Freymann or nothin'. Just a bit of idle talk..."

"No, I am certain you did not. As for these hands," I scolded whilst applying the salve liberally, "you should not have waited so long before you brought these sores to my attention. Neglect on this order is akin to rendering yourself unfit Mister Rutherford. I shall wrap them tightly and suggest you wear gloves for several days while on duty. Keep them as dry as possible when off duty."

Once I was certain that my mates had things in hand, I paid my two patients belowdecks their forenoon visit.

Downie's condition seems generally improved since his emetic, but I suspect that my greatest treatment came in the form of stopping his grog. His speech is clear and his much complained of 'headache' abated. If he remains in this manner for the remainder of the day, I shall release him back to duty.

Ford's fever is down from yesterday and he seems to have regained some of his appetite.

At noon, I rejoined the officers on the Quarterdeck to have another look through my glass at the Wasp and her quarry. They were a great distance off, nearly over the horizon. Resigning myself that it would be a long chase, I went below to have something more substantial to eat.

Email ThisBlogThis!Share to TwitterShare to FacebookShare to Pinterest
Labels: Mission 2, The Doctor

After securing form predawn quarters the crew began holy stoning the decks. We were patrolling in company with HMS Valiant, the 74 gun third rate on a south-south east course off Nova Scotia. We had the leeward position to the north and east of Valiant. The galley fires had been lit and the officers of the watch were receiving their morning coffee when we heard a cannon shot from Valiant. Upon raising my glass, I discovered that not I nor the rest of the quarter deck were able to read the signal hoist due to a fog that still laid on the sea.

As we awaited a clearing Valiant fired a second signal upon which I ordered that sail be increased and that we steer one point to starboard in order to close Valiant.

We could see that Valiant was beginning to make all sail and adjusting course to the south. I ordered the sailing master to do the same. And continue to close.

We closed quickly as Acasta is a faster sailing ship due to her recent careenage at Halifax.

Within twenty minutes we could the signal flags reading “Enemy in sight.” “Wasp in pursuit.” Followed by “Equal speed and follow.”

We responded with an Affirmative.

We reduced sail to match Valiant.

As the chase was to windward of Valiant we are unable to see her and as such I gave the order for hands to breakfast as it will some time I suspect before we come to action.

A noon we could see the smallest part of the chases topmast over the horizon. 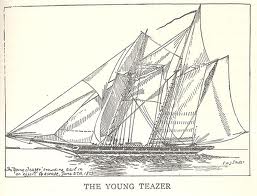