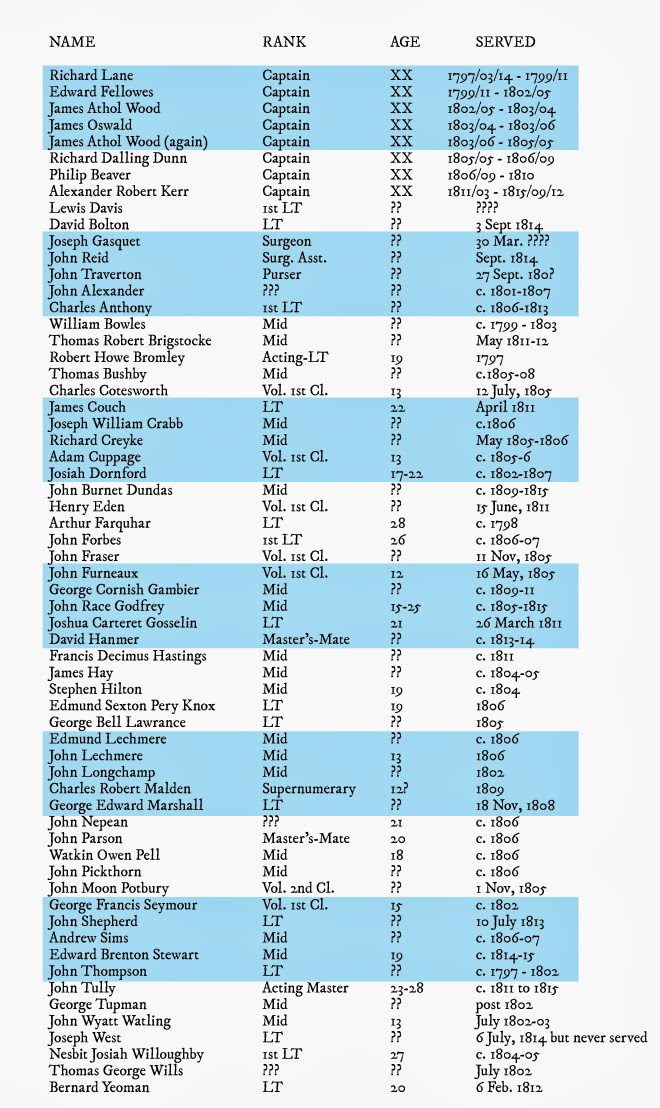 ‘Royal Naval Biography; Or, Memoirs of the Services of All the Flag-officers, Superannuated Rear-admirals, Retired-captains, Post-captains, and Commanders, Whose Names Appeared on the Admiralty List of Sea Officers at the Commencement of the Present Year, Or who Have Since Been Promoted; Illustrated by a Series of Historical and Explanatory Notes’ by John Marshall. Longman, Hurst, Rees, Orme, and Brown, 1825

‘Naval Biography; Or, Memoirs Of The Services Of All The Flag-officers, Superannuated Rear-admirals, Retired Captains, Post Captains,  And Commanders... ...From The Commencement Of The Late Reign, In 1760, To The Present Period. With Copious Addenda.’
By John Marshall (B), Lieutenant in the Royal Navy. Vol III - Part II. London: Printed for Longman, Rees Orme, Brown and Green, Paternoster Row. 1832.

‘A Naval Biographical Dictionary: comprising the life and services of every living officer in Her Majesty's Navy, from the rank of admiral of the fleet to that of lieutenant, inclusive. Compiled from authentic and family documents.’
By William E. O'Byrne, Esq.  London: John Murray, Albemarle Street, publisher to the Admiralty. 1849.

‘The Navy List corrected to the end of Dec. 1814' Published by John Murray, bookseller to the Admiralty & Board of Longitude, No. 50 Albemarle Street. pg 48

12 May captured the Spanish privateer St. Antonia (pierced for 14 guns), on the Jamaica station.

May 1798 the Acasta and Ceres captured the French privateer St. Mary de Louvaine on the Jamaica station,.

May 1798 captured the French privateer Hirondelle on the Jamaica station.

May 1798 captured the French privateer 2 vessels, Name unknown on the Jamaica station.

Between Jun 1798 and Feb 1799 burnt the French privateer Name unknown on the Jamaica station.

Jun captured the French privateer Actif on the Jamaica station.

30 Jun captured the French privateer Trompe in the West Indies.

He made a number of captures: the Spanish JUNO (8) laden with cocoa and indigo; an armed polacre with brandy and wine and a French schooner with a cargo of coffee.

Two French rowboats, two Spanish doggers and a 16-gun xebec were also taken along with a number of unarmed merchantmen with various cargoes.

The French privateer VICTOIRE, of 10 guns and 60 men was destroyed under the batteries of Aguader.

ACASTA returned home in September 1801 escorting a trade convoy and Capt. FELLOWES continued to command her until the following spring.

1802
Capt. James Athol WOOD was appointed to her on his return from Madagascar where his ship, GARLAND, had been wrecked. She arrived in Portsmouth from the Mediterranean on 8 July 1802.

ACASTA sailed for the Mediterranean on 8 November with dispatches relative to the Treaty of Amiens before returning to be re-commissioned by Capt. WOOD. She then moved to Guernsey on 7 March 1803 until the renewal of hostilities when she joined Ad. CORNWALLIS off Ushant watching the French in Brest with the inshore squadron.

1803
2 October, Capt. WOOD captured the French privateer AVANTURE from Bordeaux, of 20 guns and 144 men after a chase of 48 hours in mid-Atlantic. He also re-took her two prizes, the ROYAL EDWARD and the ST. MARY'S PLANTER, from the Jamaica convoy.

The privateer had been about to take possession of the JANE, another vessel from the convoy, before going after a fourth.

About this time Capt. WOOD took advantage of a cruise along the north coast of Spain to examine and report on the many small ports and inlets there.

He also suggested that, in the event of war with Spain, the peninsular of Santona midway between Bilbao and Santander should be occupied as a Gibraltar of the north.


1804
Towards the end of the year, ACASTA escorted a valuable fleet to the West Indies.
When he arrived at Jamaica Capt. WOOD was ordered by Sir John DUCKWORTH to remove to HERCULE, then at sea, while ACASTA under a new captain returned to England with the Vice Admiral.

No remonstrations would make Sir John change his mind and Capt. WOOD was forced to return home as a passenger in his own ship.

The Board of Admiralty immediately issued a regulation forbidding any Admiral using his authority in such a way and restored Capt. WOOD to his command. (He was not able to take up the appointment.)

Circa 23 Dec 1805 the squadron under V.-adm Duckworth, having lifted the blockade of Cadiz, was between Madeira / Canary isles, where it was reported a French Squadron had molested one and chased another convoy. The French squadron was sighted on 25 Dec and chased, but after 30 hours was discontinued and the squadron sailed for the West Indies.

1806
12 Jan 1806 anchored in Carlisle bay, Barbadoes. Acasta sent to St.-Christopher, or St.-Kitts, to expedite the preparations for watering the squadron. 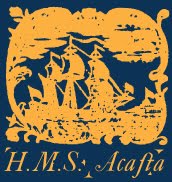 21 Jan 1806 Northumberland and Atlas joined the squadron under V.-adm Duckworth. 1 Feb Kingfisher joined with intelligence that a French squadron had been seen steering for Santo-Domingo. 3rd was joined by the Epervier off Saint-Thomas. 5th Magicienne joined confirming the intelligence. 6 Feb a French Squadron was sighted leaving Santo-Domingo. the action of Santo-Domingo Roads commenced ; 2 French ships (Impérial and Diomède) run ashore and 3 (Alexandre, Jupiter, Brave) taken ; the wash-up ; the casualties ; more wash-up.

6 February, a squadron of 7 ships under the command of Vice Ad. DUCKWORTH attacked a French squadron off San Domingo.

ACASTA, MAGICIENNE, KINGFISHER and EPERVIER were to windward of the line-of-battle ships. Two of the enemy were driven ashore and burnt and three were captured. One, the BRAVE, after surrendering to DONEGAL, was taken possession of by ACASTA and taken to Jamaica.

1807
Capt. P. BEAVER, Channel. In December he brought home a convoy from the Leeward Is.

1809
Rear Ad. Sir Alexander COCHRANE put Capt. BEAVER in command of landing the troops on shore at Bay Robert in Martinique for the attack on that island.

Lieutenant-general Beckwith, the commander of the forces, was in ACASTA with him. They sailed from Carlisle Bay, Barbados on 28 January and at dawn on the 31st. the transports carrying the army were 12 miles to windward of Carvel rock so ACASTA bore up with them for Bay Robert with ETHALION, FORRESTER, EURYDICE, RINGDOVE, HAUGHTY and ECLAIR.

The weather was very windy and squally with a considerable swell so Capt. BEAVER determined to enter the Cul de Sac with all his warships rather than anchor off Loup Garou. After placing boats with flags at the edge of the shoals ACASTA led PENELOPE and the transports in and anchored them all by noon.

Before sunset 4,500 men with a proportion of artillery and horses had been landed and all the reserve were ashore before 7 o'clock the next morning.

The enemy finally asked for a truce on 24 February after one of the magazines in the fort blew up after a prolonged bombardment from all sides.

In April Rear Ad. COCHRANE blockaded a French squadron of three sail of the line and two frigates which had taken shelter in the Iles des Saintes near Guadeloupe. ACASTA, with Capt. BEAVER as commodore of the division, sailed from Fort Royal Bay, Martinique, on 12 April with two or three thousand troops to capture the islands. Capt. BEAVER, leaving Capt. CARTHEW of GLOIRE in command, went on ahead to meet the Rear Admiral and together they examined the enemy positions.
At 10 o'clock on the morning of the 14th. the ships collected after a bad night and ACASTA led GLOIRE, NACISSUS, CIRCE and INTREPID into the narrow channel and they anchored opposite the little bay, Bois Joly.

To save the boats a long row against wind and current the landing was made in the bay instead of Anse Vanovre as planned and they disembarked on a stony beach protected by the fire of the frigates.
There was no opposition apart from guns in the Islet of Cabrit which fired over the ridge. After three days of hard fighting the forts were reduced and the French troops taken prisoner. This included taking a position 800 feet up on Mount Russel. The French ships pushed out to sea on the 14th.

Plymouth Dock Sep 6 1811 Arrived the American brig Catherine, prize to the Acasta, taken on the 29th August, after a chase of five hours, within three miles of Corsica, laden with wines, &c.

Plymouth Oct 25 1811 Arrived the American ship Trojan, Fitch, from Baltimore, detained off Bordeaux for breach of the blockade by the Armide and Acasta.

Portsmouth Dec 30 1811 Sailed with convoy for Torbay and the East Indies.

1812
Coast of America. The brig FEDERAL bound to Boston from Prince's Island was taken on 17 September 1812 and he retook the schooner BLONDE, which had been on passage from Martinique to Newfoundland, on 17 October.

On 3 November ACASTA, MAIDSTONE, AEOLUS and CHILDERS captured the privateer schooner SNAPPER of 10 guns and 90 men cruising out of Philadelphia.

The schooner FARMER'S FANCY from Charleston to Philadelphia was taken on 11 December and on Christmas Day, with the POICTIERS in company, the letter of marque brig HERALD (10) bound to Baltimore from Bordeaux.

The latter vessel was taken into the service as the BARBADOES sloop of war. She also assisted in the capture of the privateer schooner SNAPPER (10) and the letter of marque PORCUPINE which was taking a valuable cargo from Bayonne to Boston.

In January 1813 the two ships captured the privateer schooner HIGHFLYER of 5 guns and the ship LYDIA from Rhode Island.

Robert COX, a seaman from ACASTA, was tried by court martial for deserting to the enemy with the cutter on 13 May 1813 while on the coast of America and encouraging the other members of the boat's crew join him.

The charges being fully proved he was sentenced to death.

The American schooner PROVIDENCE and the sloop DIANA were sent into Halifax in July 1814 and the two schooners STEPHANIE and HAZARD and the sloop JANE were taken on 2 August.

For several months Sir George COLLIER in LEANDER watched the American CONSTITUTION in Boston but while LEANDER was re-provisioning in Halifax, leaving NEWCASTLE and ACASTA off the port, the CONSTITUTION, with two other heavy frigates, sailed on a cruise.

Sir George had orders to send ACASTA into Halifax as she was in need of a refit but he yielded to the entreaties of Capt. KERR and allowed her to accompany LEANDER and NEWCASTLE in search of the enemy.

On 11 March 1815, in heavy weather, they sighted the American ship CONSTITUTION with her prizes, the sloops LEVANT and CYANE, off Porto Praya. Due to a variety of circumstances, mainly due to confusion in signalling, the Americans were able to escape but LEVANT was retaken after she had run ashore when LEANDER fired on her.

ACASTA took possession of her.

Sir George left NEWCASTLE and ACASTA to the windward of Barbados while he went on a fruitless search for the CONSTITUTION which was on her way home.

ACASTA returned to England in July 1815.