A Letter from Trafalgar

The following is a letter written by Robert Hope, a sailmaker aboard HMS Temeraire during the Trafalgar action in 1805. 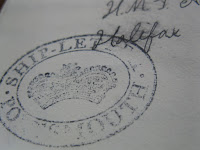 Dear Brother,
This is with my love to you hopeing
It will find you in good health As I bless god
I am at present, what do you of us lads
Of the Sea now, I think they won’t send their fleets
Out again in a hurry, I suppose you know more
About the Action than I can tell you, the first
Ship that we Engaged was the Santa Trinidada
The Spanish four Decker. We engage her three
Quarters of an hour when the Victory fell [erased]
Along Side of him we dropd a Stern when five
More of the Enemy’s Ships came upon us and
Engage us on every Quarter, for one hour and
Sixteen minutes, when one Struck but being so
Closely Engaged that we could not take posession
Of her at that time, two more Seemed to be quite
Satisfied [wh] with what they had post so Sheer’d
Us, so with that Intent, one Dropt on our Starboard
Side, Called the La Fue, and other dropt on our
Larboard Side Called Le Doubtable, they Kept
A Very hot fire for some time But we Soon
Cooled them for In the height of the smoke
Our, men from the upper decks Boarded them
Both at the same time, And Soon Carried the
Day, at this time, at this time I Counted when
Smoke cleared away Seventeen Prizes and one
All on fire, But we have ^only got four Into
Giberalter, for a Gale of wind Came on the day
Following that we was Obliged to Scuttle them
for they was so very leaky, Taken & Destroyed
Is Twenty five, we had forty three killed
And Eighty five wounded, and twenty Seven
Drowned In the Prizes, I sent a letter to my
Father from the Rock, So when you receive
This please to let him know that I am arrived
In England, for I long very much to hear
from him. And Give my love to my Sister
And your answer upon the receipt of this will

Kennedy, Maev. 2010. "Trafalgar account is rare voice from below decks." The Guardian. October 19.