Videos for AFTER Christmas


A full length program about the Royal Navy to get you away from cleaning house after opening presents, in-laws who have stayed a little too long after Christmas or cleaning dishes after your holiday dinner party! ENJOY, and all the best of the season to you my friends.

Video - Any post with a video or a link to a video in it can be found here. Fair warning, clicking on this link will send you down a rabbit hole. Music videos, presentation videos, event footage, battle footage, some of these videos are even full length programs from television.

Email ThisBlogThis!Share to TwitterShare to FacebookShare to Pinterest
Labels: Video 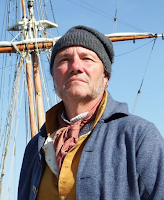 Today's special Christmas post written by our own Tony Gerard:

Well, Mary I suspect that as I write this your Marm is asleep in the chair my the fire and the small ones are still savoring their hard candies. I recon you killed that grey goose? I wish with all my heart I could be there will you all.

As it was, for being without family, I just partook of one of the finest Christmas dinners of my life. It was unexpected, that’s for certain, and how it come about is something of a story. The whole story come from the wardroom's servants who heard it young Mister Hamilton hisself as he told it to the other mids.

Heres the lay of it. The last two years, of a Christmas, the Captain had his man Schwendau- he was once cook for the king of Prussia or some such- to make up a jolly big pudding, enough for the whole crew, with figs and raisins, and a double ration of rum. And Schwendau would supervise our old one legged cook Bowford – that fellow could boil a silk purse till it turned into a sows ear-with spices and such so that it was something more than just the usual peas and salt beef.

Well now we are without a Captain, and our First Leftentant is too skint to even think of feasting the whole crew, a raisin and figgy pudding was right out. To make matters even worse as we come into winter quarters in Bermuda we find that most of the salt beef is gone over. You could smell it all the way up to the quarterdeck when they broached the barrel- and everyone after almost the same. 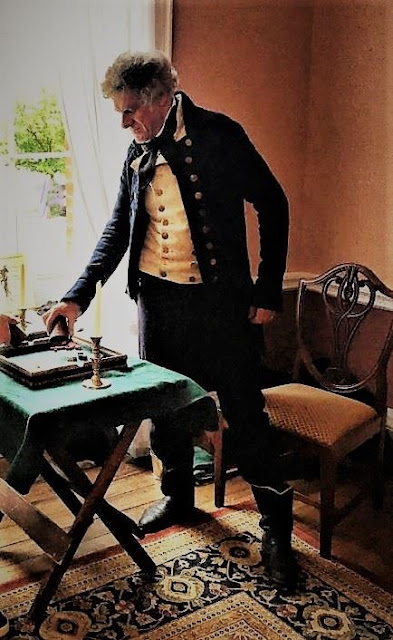 Our purser, Armitage- as soon as we get anchored- goes so the the viticular ashore-and they get into a row with the viticular saying that the beef is still good and Armitage saying that it was a sham when it was casked because it is good a quarter of the way down and rotten below. And we got no Captain to intercede on our behalf. So the first Leftentant puts us on half rations for meat cause he don’t know how long before the meat rations is setteled. So we are looking at a Christmas dinner of peas and a half ration of beef and everyone is right glum about it.

So this is where things get strange and the story comes from Mister Hamiltom and the gig’s crew.

Armitage gets permission for the Sailing Master MacLachlin and young Hamilton to accompany him ashore. As they are going in Armitage take out a bag and- its full of Yankee silver dollars! He gives a handful to both McLaughlin and Hamilton and tells them “Count them Gentlemen, I would like them returned when we are back again”, but most he keeps hisself.

Once ashore they go to the tavern most frequented by worthies such as themselves. Armitage tells Hamilton to have a walk around for a bit, then to come in and ask to join their game. So Hamilton takes hisself for a goodly walk and comes back to the tavern. He says the place is packed – it was to be expected cause the harbor was full- and he says Armitage and MacLachlin is playing at cards with a Marine officer and another gentleman. He watches for a bit and then asks to join in, even introduces hisself for good measure. So he’s using the Yankee dollars Armitage gave him from before, and he says at first he has never done so well- but Armitage is doing rather poorly. MacLacklin is also doing rather well, but also at Armitage’s expense. There is so much cash money involved that soon there is a crowd watching and more fellows join in the game. After a bit Hamilton’s luck changes and he loses is whole pot to Armitage, MacLachlin loses most of his pot, then says “Too rich for my blood” and leaves the game, but stays to watch.

So gentlemen come and go, but Armitage’s luck stays good. He keeps winning- always putting some back in his purse, and by late Hamilton says that Armitage has won a small fortune. When he finally gets up to leave the Marine officer – who has played all night and lost heavily- says “I must protest at you leaving Sir! You must stay and give us a chance to recover some of our loses!”

And Armitage says “My apologies Sir, but I have duties to attend” and which the Marine- who is in his cups also- says “Damn your eyes! I do not know how you have accomplished it – but you are a scoundrel and a cheat and I will have satisfaction!”

To which Armitage asks “Do you mean to challenge me upon the field of honor, Sir?”

“I do." says the Marine, “You may choose the time, grounds and weapons!”

“Then I shall choose here, now and cards,” says Armitage, cool as a winter faire on ice, “one cut of the deck high card wins. If I win my honor shall be satisfied, if you win you may choose place, time and weapons”.

Armitage pushes the deck towards him and says “you may do the honors”.

So the Marine shuffles the deck and sets it in the center of the table. Armitage nods for him to go ahead. The Marine gives him a glare, and cuts the deck. He smiles wickedly and shows his cut to all those looking- the KING of Diamonds!

Armitages nods again, taps the table twice and makes his cut. Ace of Hearts! “My honor is satisfied Sir” he says as he gets up “I bid you all a good evening”.

So on the way back MacLachlin gives back what Yankee dollars he has left. Hamilton says he knows both him and MacLaughlin is wondering, and he can no longer contain hisself and starts to ask “Sir, I must know..” but then realizes he don’t know how to ask it nice.

“Oh, it’s no deception” says Armitage “one must just pay close attention to which cards have been played and which have not.”

“But the cut?” Says MacLaclin.

“That” says Armitage “was luck”.

So two days later aboard comes two bullocks, shore bread and fresh butter, raisins and figs for pudding and oysters and lobsters for a stew! No one can figure out what has happened, then the story comes out by way of the Mid's servants.

Well Schwindeau and old Bowford done justice by what they had to work with and made a feast to be remembered. As we is all at our messes Hollybrass sends the boy Thomas to ask for Armitage. Well, when Armitage comes down everyone hushes- you could have heard a pin drop on cotton- and then Hollybrass says “To Mister Armitage- the Founder of our Feast” and we all give him three good cheers!

He smiles right kindly and says “Well Gentlemen, just don’t expect me to forgive your debts come the New Year.”

After we is back to eating Rammage says to me "Well, Bobby ye missed Trafalgar, but you was there for something that has never happened before and never will again.”

“A Purser saved Christmas and was cheered by his crew!” he says- and hes right I am sure- them things just don’t really happen.

-A portion of a letter from Robert Watson,
aboard HMS Acasta, to his wife, Christmas 1810

A Happy Christmas for the Acasta

It was to be a Happy Christmas indeed when, near this day (in 1812), the Acasta in the company of HMS Poictiers overtook and captured the American Privateer Herald as she and her prizes were bound for Baltimore. She had two other vessels with her, the Friendship and the Little Catharine.

The Herald, being a ship of only 10 guns and barely 50 men, was no match for the combined might of the Poictiers and the Acasta. According to the reports I've heard from the Acastas that have been aboard the Friendship, she has a fortune in cargo aboard her, a fine Christmas present for every man in the crew (in terms of prize money that is).

The Cargo of the ship Friendship alone was estimated as per table; the brig was the packet Little Catharine of 6 guns. This cruiser was subsequently captured by the Acasta and Poictiers at sea, December 25, 1812.


Source:
George Foster Emmons, The navy of the United States, from the commencement, 1775 to 1853; with a brief history of each vessel’s service and fate ... Comp. by Lieut. George F. Emmons ... under the authority of the Navy Dept. To which is added a list of private armed vessels, fitted out under the American flag ... also a list of the revenue and coast survey vessels, and principal ocean steamers, belonging to citizens of the United States in 1850. ( Washington: Gideon & Co., 1853.) page 180, 181