A letter to the Doctor 3

This is the master’s mate writing for Mr. MacPherson, who has taken ill with the fever while caring for his daughter, who seems to be improving ever so slightly, but is still extremely weak. I do believe she will live, and I am giving her as much chamomile tea as she can sip, but now we are very worried for our shipmaster. There are six of us aboard. We have run out of the Peruvian bark, as Mr. MacPherson insisted we all take it preventatively, along with copious amounts of the aforementioned tea. Yet I believe he himself did not take any of the Bark, as there was not that much to be had aboard our vessel.

I am returning your medical book, as Mr. MacPherson directed before he became quite delirious. He was most appreciative, and after reading the chapters you marked he was of the opinion we may have stayed too long up river where foul, brackish marshes may have infected us. You sir, have done us a service by lending us this book and now I shall return the favor by warning you about the dangerous miasmas to be found at the river mouth. I am off to find an apothecary that has Peruvian Bark for Mr. MacPherson, and in doing so, I hope to find a way to get this letter -- and your book -- back to you.

We are indebted to you and Captain Freymann for your kindness and display of humanity during these troubled times.


You too can get in on the fun of writing a letter to your favorite Acasta crew members, to find out how be sure to have a look inside the MAIL PACKET. And special thanks to author Linda Collison for her participation! 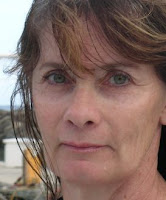 Collison's short stories and articles have been published by a variety of magazines. She has received awards for her writing from Honolulu Magazine, Southwest Writers Workshop, the Maui Writers' Conference,and the National Student Nurses Association. The New York Public Library chose Star-Crossed to be among the Books for the Teen Age -- 2007.

With Bob Russell as co-author Linda wrote two travel guides: Rocky Mountain Wineries and Colorado Kids (Pruett Publishing). The husband-and-wife team has crossed oceans together aboard the HM Bark Endeavour and on their own sailboat. They met skydiving.