How to Press a Cook 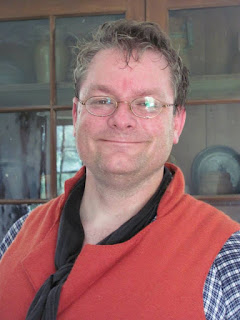 I must recount the experience today of preparing a grand meal for Captain Fryman, the officers and a few sailors of HMS ACASTA. They came ashore to celebrate wonderful news from the Admiralty they have been ordered home after this terrible war with those Yankee’s in America. Oh, how the spirits were high, the cheer in which they roamed with. Shortly after the bakers boy dropped off the day’s peel. I was asked by the Captain his self to prepare the best of foods we had in the larder, spare no expenses and no holding a quarter back! he said. At the time we had a few scrawny hens, a freshly butchered hog, and odd bits from the garden. With cheer my response was gracious and eager. I told him, he and his crew would feel no pains or have want when they were done, or else you can put me into a brine barrel. He bellowed with a deep laugh and sortied off from my kitchen at the house. As these men were full of cheer, I had to prepare something grand as I could so I laid in my larders stocks and put to it. The master of the house did tell me the Captain was his guest and to fill any orders he gave as if his own words, by his own mouth. 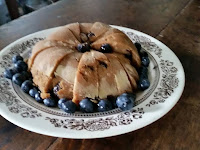 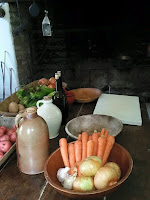 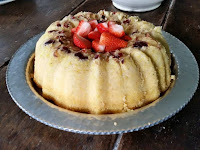 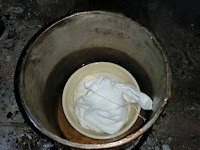 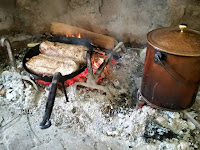 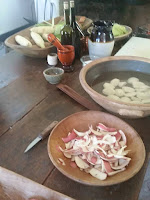 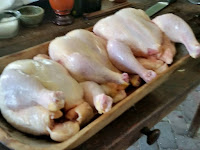 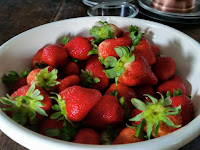 I first mixed a Lemon Corn meal pudding and slowly steamed it for a pudding, when done off the coals, I would give it hearty doses of brandy and serve it with strawberries from the milking pasture. Next, I dash and cleaned the hens. They were past laying and other than being a nuisance to me, I was glad to rid them to these fine men of the crew. I dressed them and even took time to candle off the bits of feather that didn’t come with the plucking. I would rub these down with herbs from the cutting garden and baste them with butter and their own juices. I then cut the loins out of the hog’s saddle and rubbed them heartily with a simple mix of salt, pepper, and ginger root and put them into irons. Shortly after gathering carrots, I happened upon some bleached flour. What a fine sight that was. I had forgotten about it in the back of the cupboard. I checked and sifted it for stones and weevils, and then mixed in a hand full or two of sweet suet, some of the sugar cone, cranberries from the winter drying room, and spices. This was put into my pudding cloth and set to steam away the afternoon and sing to me as it cooked. What a wonderful thing a pudding is, such an entertaining dish to the ears as well as the appetite. I stole out to the spring house and snatched up some cheese we hand hanging and found a couple of Country Pates from the last dance had here at the house and gathered the top cream from the milk pail to make custard. I went on with the other odds and ends of the meal, the side dishes were humble enough. But handled with care and given great attention to my knife work. 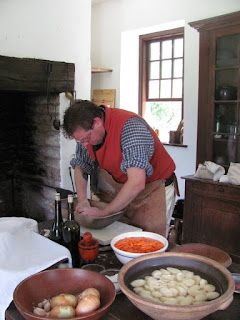 The day drove on and the heat of the hearth and the weather nearly had me. As my stockings were soaked as if I stood in the brook the whole day. Shortly after the night watch began to tinder and tinker with the lamps, I was done. I sent word to Captain his table was ready. The Officers and men, had on their best dunnage. What an honor for me to prepare for them. All of these men seem weathered and hard bitten by wind and wave, but warm and cheered as if already home.

A few of the hands gave me help in carrying the repast out to the porch. They spoke a few words and like a mighty broadside, there went in with all hands, as if boarding a ship. The meal was not hardly started, when I was summed by the Captain his self. Huzzah to the cook he said, and the crew replied back, Huzzah. It warmed me through and through. Then before all, the sailor called Apple asked the Captain, if they should press me for crew? Then before all he laid the press of a shilling before me. I gladly accepted. For I hope to get home to the mountains in Austria and to be with my family. This was by far not my finest of meals, but one of the finest of times.