In recent years there has been a tendency among historians and re-enactors to gloss over many of the more brutal and sad aspects of actual history. Slavery, child labor and blood sports involving animals were all daily aspects of life in the early 19th century. In the Acasta we believe in portraying history “warts and all”. Just as gamecocks were not uncommon on warships, often in the Acasta camp you may see one or more fighting cocks. Of course, the actual status of these guys in the unit is that of beloved mascots.

Here’s a bit about each of your Acasta Gamecocks-

Lord Nelson- Lord Nelson is a Black Breasted Red (his coloration) Old English Game (his breed). The breed Old English Game dates back to perhaps the 16th century in Europe. Banty (extra small sized) Old English Games are still common among poultry fanciers because of their beauty, but the decline of cock fighting has resulted in standard sized birds becoming rare. As with many re-enactors “Lord Nelson” is only a persona name. Around home he goes by “Blinker”. Blinker was an 18th century cockfighting term for a bird blind in one eye. Just like his namesake, Lord Nelson is blind in one eye, the result of a disagreement with one of his brothers at a young age. At almost 6 years old, Lord Nelson is the oldest of the Acasta gamecocks. 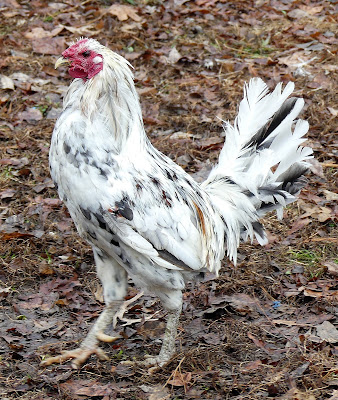 Jonathan Blue- Jonathan Blue is a Delaware Blue Game, an 18th century American Game breed. Blue coloration does not breed true in chickens, so Jonathan’s color is “Splash”, basically white with a smattering of blue and red feathers. “Jonathan “was an English term for Americans during this period, hence the name of this American breed bird. Delaware Blue Games are even more rare today than standard sized Old English Games. The University of Delaware keeps a flock, but years ago a professor there mixed in other breed bloodlines, taking the birds further away from their historic appearance. Our Acasta Delaware Games are not from this bloodline, so they maintain the breed’s historic appearance. Jonathan Blue is the original sire of all the Acosta’s Delaware Blues.

Tom Crib- Tom Cribb is a Delaware Blue Game of the blue coloration. Jonathan Blue is his father. He is named after a famous bare-knuckled boxer of the Acasta time period.

Blue Peter- Blue Peter is the son of Lord Nelson crossed with a Delaware Blue Game hen. His appearance is actually typical for that of an 18th century Delaware Blue Game. At just going on two years old, he is in his prime. He is named after the flag signaling that a ship was getting underway to set sail, the “Blue Peter”