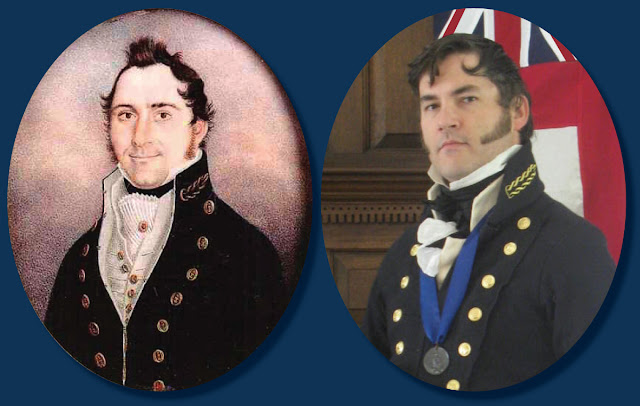 Last week, Mr. Matthew Brenckle of the USS Constitution Museum contacted me after having found a page for an old online auction that offered a miniature painting of a man in a Royal Navy Surgeon's uniform.

I contacted the auction company who directed me to the original seller. I sent them a request for a larger image and additional information along with an image of myself in my RN uniform. This was their response:

"Your uniform is an extremely faithful reproduction of the naval surgeon’s uniform from this period. I will have to take care when cataloguing a sitter wearing a uniform along these lines in the future. Sadly, we do not have any images on file for lots auctioned prior to the Bonhams-Brooks merger of 2001. Please however find scans from the hard copy of the sale catalogue for your records.

A fine portrait of a Naval Officer, with side-whiskers, wearing a blue coat with white facings and gold buttons stamped with anchors, white waistcoat with gold buttons, black stock and white frilled cravat with ruby and pearl stickpin gilt-mounted rectangular papier-mache frame, inscribed on reverse: Taken at Chatham / by Monsr Muller, on / the 2nd Aug 1820, / Aged 29 Years / for Mrs Johans *** / ****

You very rarely find images from the period of RN Surgeons in their uniforms, which is what makes this particular find of such importance. There are some lovely details included in this little painting, the hooks and eyes that are used to fasten the Surgeon's coat shut are clearly visible, as well as the anchor details on the buttons. Something else that I haven't seen on a surgeon's coat before is the white lining of the coat's interior.

The Joshua Horwood coat that I have shown you before, the official description states that the coat is unlined save the sleeves. In the photo of the Horwood collar, you can see that the interior of the collar is unlined and you can also see the top hook and eye.

Detail from The Death of Nelson, 21 October 1805, an 1807 painting by Arthur William Devis portraying the death of Horatio Nelson at 16:30 on 21 October 1805, below decks on his flagship HMS Victory during the Battle of Trafalgar. It is now in the National Maritime Museum, Greenwich.