Valiant and Acasta with the United-States, &c. 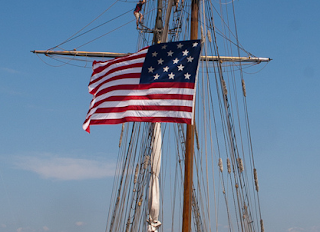 On the 1st of June (1813), very early in the morning, the American squadron got under way and stood out to sea ; but at 9 a.m., just as they were clearing the Sound, the ships were discovered by the British 74-gun ship Valiant, Captain Robert Dudley Oliver, and 18-pounder 40-gun frigate Acasta, Captain Alexander Robert Kerr. The two British ships gave chase, and the three American ships put back ; both parties hauling to the wind under all sail.

At about 1 h. 30 m. p.m. the American squadron bore up for New-London ; and the United-States and Hornet, being too deep for their trim, started their water and threw overboard a part of their provisions.

At 2 h. 15 m. p.m., being far ahead of the Valiant, and just within gun-shot of the United-States, the Acasta fired a bow-chaser at the latter, just as the Macedonian was rounding New-London lighthouse. The United-States returned the shot with one from her stern. Instead, however, of bringing to and trying to cut off the British frigate from her consort, as many of the spectators on shore expected to see done, Commodore Decatur stood on, and anchored with his squadron in the river. Having shortened sail, the Acasta hauled to the wind, and tacked, and soon afterwards, with the Valiant, anchored off Gardner's island, distant about 12 miles from New-London.

Having no persons on board acquainted with the navigation of the Sound, the British ships, particularly the 74, chased with much less effect than they otherwise would. It was not, of course, known to Captain Oliver, that he might even have followed the American squadron into New-London; and that, had the United-States and her companions ascended the river beyond his reach, he might, with very little risk, there being no battery of any consequence, have placed the Valiant and Acasta against the town, and blown the houses about the ears of the inhabitants, if they refused to deliver up the ships.

For several weeks previous to this event, the New-York and Boston papers had been filled with panegyrics on their "naval heroes," whose valour they depicted as impetuous, amounting almost to rashness. Some of the papers, as if a little ashamed of what they had said, now added "a rasée " to the two British ships, and gave that as a reason that the American commodore suffered his squadron, to be chased into New-London.

from: "The naval history of Great Britain, from the declaration of war by France in 1793, to the accession of George IV. Volume VI."