The Court Martial of Mr. Cox

A COURT MARTIAL was lately assembled at Portsmouth, to inquire into the cause of the loss of H.M.S. Penelope,* on her passage to Quebec; when the Court, upon the evidence adduced, decided that her loss was occasioned principally by the state of the weather, and the set of the current : that Mr. Homer, the master, was not sufficiently attentive to the situation of the ship a short time previous to her running ashore, and did adjudge him to be placed at the bottom of the list : that due attention was not paid by Captain Galloway and the first lieutenant of the ship, to the safety of the ship's company, by their neglecting to make proper arrangements for getting them on shore ; and that great blame was therefore also imputable to the said Captain Galloway and the first lieutenant. The Court thereupon adjudged Captain Galloway, in consideration of his having been afflicted with the rheumatism, to be only reprimanded, and Lieutenant B. Hooper to be severely reprimanded ; and that no blame was imputed to the other officers and ship's company, except Walter Howell, who for drunkenness, disobedience of orders, mutiny, and desertion, was sentenced to receive 500 lashes. 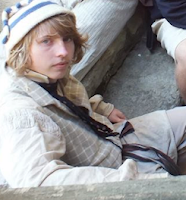 Robert Cox, a seaman of the Acasta, was also tried for deserting to the enemy, on the 13th of May, 1813, with the cutter, when employed on the coast of America, and for encouraging the other part of the boat's crew to give way, cheering them up himself. The charges being fully proved, the Court adjudged him to suffer Death on board such of his Majesty's ships as the Commissioners for executing the office of the Lord High Admiral may direct.

from: The Naval Chronicle : containing a general and biographical history of the royal navy of the United kingdom with a variety of original papers on nautical subjects
Volume: 34 Page 165