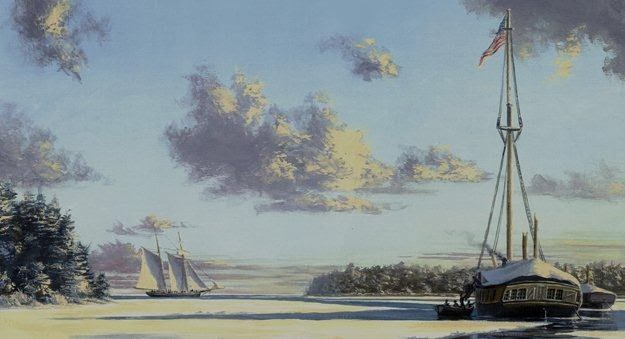 I trust the Christmas season was as pleasant for you as possible, perhaps with an infusion of prize money to raise your spirits and ease the tedium of blockade duty? I recently read of some of Acasta’s activities and know that you have had some exciting adventures!

You didn’t tell me Sir, that Acasta had an encounter with frigate USS United States on June 1st off Long Island, and I have heard that she was under the command of the notorious Stephen Decatur at the time! The report gave no doubt but that your saucy frigate demonstrated she has the legs of that beast!! Indeed, I believe he would have met you, ship to ship, man to man, (face to face!), but for the presence of HMS Valiant (74). Instead, after receiving a few round shot from Acasta, he withdrew up the Thames to New London and fortified the place against you! Sir, I commend you on the exploit and have confidence that your next encounter will be even more successful! Captain Freymann, a first-hand account of your engagement would go far to alleviate the sullen and depressed mood of we land-locked sailormen here in the interior. Mostly, we have been beset with more and more reports of defeats and failure and would welcome such grand news! 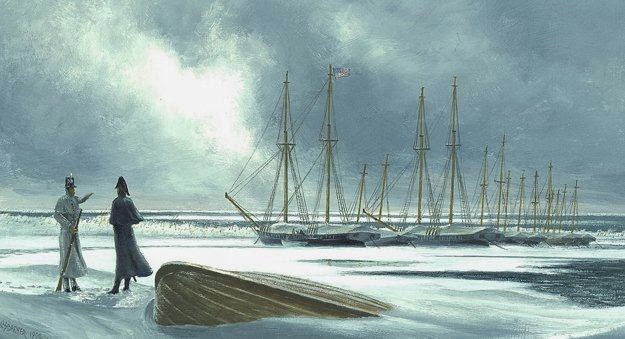 We have put the ships in ordinary for the winter, sending down spars and removing canvas and perishables to storehouses on shore, building temporary houses to shelter and preserve the decks and lower masts of the ships at the station here on Navy Bay. The process of preparing the ships for winter was delayed because of American movements in the last two months, ones that caused great alarm and kept the ships readied for action. 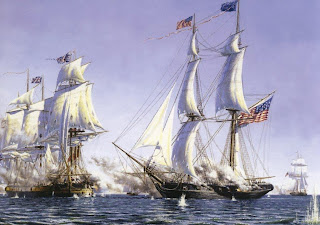 You’ll recall that the US forces had exploited the loss on Lake Erie by following up with a quick invasion of the Western Frontier, defeating General Proctor at the Moravian Town after capturing Forts Detroit and Malden. The remnants of the Right Division retreated to Burlington Heights and the headquarters of the army there under General Vincent. It was daily expected that Harrison would appear with his army and begin to assault the stronghold but he did not continue. Instead, he secured the recently acquired forts by assigning garrisons, and released the militias from military service. The bulk of his army was transported east to Niagara by the Lake Erie Squadron and then to Sackets’ Harbour by the Lake Ontario Squadron, taking with them many of the men on the Niagara frontier. It became apparent that the next major effort of the US forces was an assault in the Kingston region and within a month of the disaster in the west, a major invasion was occurring in the east. This shift in force from front to front echoes the swift actions of the late General Brock last year and shows how disastrous the loss of control of the lakes can be.

Lieutenant John Johnson had been sent to Sacket’s Harbour under a flag of truce and returned to Kingston on the 15th of October with news that the place was filled with all manner of small craft and that many troops were assembling. Commodore Sir James Yeo in concert with General De Rottenburg, had been endeavouring to send supplies up the lake to the beleaguered garrison on the Niagara frontier and Burlington Heights, but bad weather had delayed them. With Johnson’s news, it was decided to retain the squadron for the moment and several new gunboats were dispatched with the Lord Beresford and Sir Sidney Smith (later joined by the Earl of Moira and Lord Melville) to observe the Americans’ actions, this force under the overall command of the recently posted Captain William Mulcaster. HM Ships Wolfe and Royal George were retained by Sir James to aid in the direct defense of Kingston itself.

On the night of October 17th, the US force under Major-General James Wilkinson left Sacket’s Harbour and made for Grenadier Island near the head of the St. Lawrence River. It has been reported that this army was 7000 or 8000 men strong, thereby dwarfing any British force in the area. Reports about the size of this invasion cased great concern in Kingston and the garrison was put on a basis of high readiness, for to lose Kingston was unthinkable.

To compound matters further, another US army under Major-General Wade Hampton in Plattsburg, NY, on Lake Champlain, began its march west and north to commence an invasion of its own. On the 21st of October, this force crossed into Lower Canada and began to descend the Chateauguay River which closely parallels the St Lawrence between Kingston and Montreal. This army was said to consist of 4000 infantry, 200 dragoons and 10 field guns.

Commodore Chauncey supported the US Army’s move to Grenadier Island but indications are that he was concerned that they might be trapped in the St Lawrence by winter ice. This allowed Mulcaster to get in amongst the invasion force and in a driving snowstorm on November 1st, he attacked their camp at French Creek and again the next morning, only withdrawing after fierce shore-based artillery fire (including hot shot!) began to cause significant damage. Captain Mulcaster then returned to Kingston.
On the 2nd, the American squadron sailed up to the east end of Wolfe Island and dropped anchor while the remaining bateaux of the invasion force continued to re-enforce the camp at French Creek.

At dawn on the 5th, the American army struck out downstream from the camp at French Creek. That afternoon, Sir James arrived with our fleet and anchored north of the US squadron. As the gap between Wolfe and Grindstone Islands is strewn with shoals, neither squadron closed with the other and, the following morning, Commodore Yeo withdrew to Kingston again. After the Royal Navy Squadron had vanished from sight, Commodore Chauncey was concerned that we would mount batteries on Carleton Island and blockade the south channel with our Lake Ontario Squadron so took this opportunity to withdraw his ships and return to Sacket’s harbour.

By now, it was apparent that Kingston was not the Americans’ intended objective and that we must prepare for an attack on Montreal. Governor-General Prevost ordered a corps of observation to be formed at Kingston including 550 men of the 89th Foot, 300 men of the 49th Foot, and 20 gunners with two field guns, all under Lt.-Col. Joseph Morrison, to pursue the enemy. This force was loaded into HM Schooners Lord Beresford and Sir Sidney Smith, six gunboats and several bateaux and began the descent from Kingston late on the 6th under the command of Captain Mulcaster. (I was fortunate to be included in this group, commanding the gunboat Alliance).

The Americans would need to pass the strong point at Prescott where Fort Wellington dominated the river, and this they did, at night on the 6th. Over the next two days, an advance force under Brigadiers Macomb and Brown cleared the way of any resistance between Prescott and Cornwall while the main body continued down river.

On the 9th, we reached Fort Wellington and added her garrison to our force, bring the total to more than 1000 men. Here, we left the schooners and carried on in pursuit. We caught them next day and opened fire on the rear elements of their flotilla. They landed field guns and fired back, severely damaging the gunboat Buffalo which withdrew to Prescott. That night, the British troops were landed and established a camp around the farm of John Crysler. The Americans camp was just downstream of the farm and Wilkinson determined that the pursuers were to be engaged.

On the 11th, Brigadier-General Boyd led about 2400 of the American force against Colonel Morrison’s redcoats but came off the worse, 350 casualties to 185. The next day, the US army shot the Long Sault rapids and rejoined the advance brigades under Brown and Macomb at Cornwall. Surprisingly, Major-General Wilkinson then took his army across the river to the US side and up the Salmon River to French Mills where he began to make winter camp.

The reason for Wilkinson’s sudden change was due to some news he received at Cornwall. General Hampton’s force on the Chateauguay River had met with an unexpected obstacle in an entrenched army consisting of Canadian embodied militia and fencible regiments and had suffered a defeat on the 26th of October. As this second army was to co-ordinate on an attack on Montreal with the St. Lawrence force, Wilkinson must have deemed it too difficult a task to complete alone. And so, with most barriers past and few remaining in his way, he called off the invasion. I confess I was amazed.

Captain Mulcaster brought the gunboat squadron down the rapids and tied up at Coteau du Lac opposite the Americans. When it became obvious that they were not leaving their camp, we began our return to Kingston.

The November storms are famous in these regions and efforts by both sides to move supplies to soldiers on the frontier are greatly hampered.

After returning to Sacket’s Harbour November 10th, Commodore Chauncey instantly prepared for a voyage up the lake to relocate troops from the garrisons at Forts George and Niagara to Sacket’s Harbour whose defenders had mostly gone downriver with Wilkinson. Departing on the 13th, a stiff northeast wind brought them to the Niagara River on the following evening. By now, the wind was so strong, they could not enter the river and had to wait until the next day. Eventually, provisions were landed and a brigade of troops was embarked and the squadron sailed for Sacket’s Harbour, the Pike arriving on the 20th. However, the gale had scattered the squadron, the Fair American running ashore at Niagara and the Julia caught for a time in Burlington Bay with that lee shore that had caused Chauncey to leave us alone after our encounter in September. It wasn’t until the 27th that the US squadron had all returned to Sacket’s.

Our efforts were of a lesser degree, sending the schooners to supply posts up the lake while keeping the sloops closer to Kingston, eventually beginning the process of placing them in their winter states after their last trips on December 3rd.

And so, the long dark cold northern winter begins. We will not rest however, as the next campaigning season will be upon us soon enough and we are not prepared for a renewal of hostilities. We have plans and they may surprise you. As I may, I will inform you of them, in the New Year.

I wish you good fortune, Sir.

I remain,
Your Most Humble and Obedient Servant,
Thomas Hurlbut, Captain