A Note to the Surgeon from a Sailor 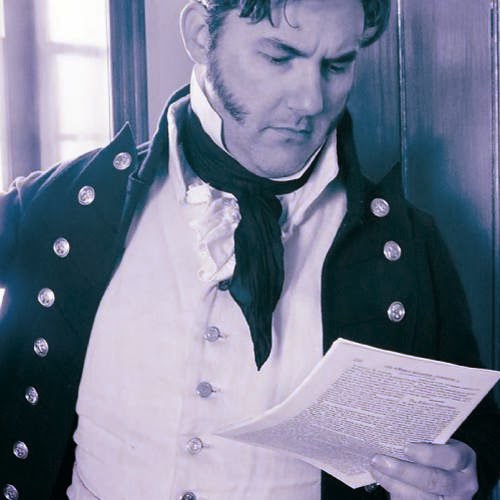 I tell you my story of my false impressment, and your man Baptiste has said you might listen. It is a sad tale indeed. I ask you as you are a known friend to the poor sailormen aboard this ship, and in the hopes that you will listen to my tale, determine the truth of it, and allow me a fair hearing with the captain.

In the few weeks before Acasta sailed from England, the ship’s lieutenants led parties of loyal men to seize upon any likely sailors to come and serve aboard the ship as she was short-handed. I was one taken up by such a party and despite my telling that I was not a sailor at all, it was insisted that I must be, and told I should just take the bounty as a volunteer and be done with it.

I asked why it was that I must be a sailor? Why, by my clothes and queue, it was obvious to all.

“Oh, that”, I said. “Well, I am a man-servant to a rich man who fancied himself a sea-captain and had all his household staff wear checked shirts, neckerchiefs and blue jackets! We all called him ‘Captain’ or ‘Sir’ or ‘Your Honour’ and answered, ‘Aye, Aye!’ as briskly as possible to please him. We even went so far as to use what sailors’ words as we could think of and came to the manner of saying, ‘Avast!’ and ‘Blow me down!’ and such like as would make our master think he was aboard ship. I could never remember starboard from larboard but I don’t think he knew either as I used each many times for left, right, front and back and he never corrected me.”

The men of the press gang laughed although I couldn’t see the joke.

One man says if I take the bounty, we could all have a drink. I was sore tempted as it had been a while since but I was on an errand for my “Captain” and told them I must be about my duty. They laughed again.

One says, “You must come aboard and kiss the gunner’s daughter!” this with a distinct glint in his eye as if he is suggesting real mischief.

Not knowing which of  these men was the gunner, I said with as much respect as I could, “I’m sure she’s a right pretty thing and any man would be honoured for the privilege, but married I am already, and it would not be right to kiss another!” and I meant it. My poor Polly! She didn’t know what happened to me!

They laughed the harder at my misery.

Another says, “You’ll get a taste of the cat!” and they roared with laughter again!

“Well,” says I, “I’m alright with beef, pork or mutton and hens, duck or goose, and once, I had venison, but I’ve no thought to eat your sailors’ vittles, thank you very much! Maybe rabbit?”

“Take the bounty,“ I hear again and then I tried to run away.

When I came to my senses, I was down on the orlop deck, covered with filth and stinking of ale. The man standing over me says, “Awake? Good! We’re to make more sail! Up you go!” and he pushed me up the stairs. I made it to the upper deck, noticed that there was no land to be seen, and then was urged forward by one fellow whom I remembered from the shore party. “You took the bounty,” he says. “Remember that!”

“Hands aloft! Shake out a reef in the foretops’l!” says a man in a cocked hat.

The men I was standing with began to run towards the rope ladders. I stood motionless. Then a mate struck me with a piece of rope (not hard, he too was in the gang), “Move, you!” I scampered to the side and began the terrifying ascent. He hit me again and followed me up to the platform (he called it the foretop). I arrived much later than the rest and didn’t know how they managed to get past the part where the ropes go backwards, away from the mast. He pushed me through the small hole.

“Don’t look down!” he whispers in my ear. Of course, I wanted to see why not and so looked. In an instant, I was struck motionless! The height was dizzying and I also realized that the whole ship was rocking. I was often well out over the ocean and then over the deck, to and fro, again and again. I began to feel quite unwell.

Then two of them came down from the yard above and hauled me up to stand on the rope hanging from it and pushing me out to the extremity! Now I realized that the ship was also pitching, front and back together with the sideways! I don’t think I’ve ever grasped anything as tightly as that yard before!

I had men on either side of me and they were busy working on the sail. “Undo that” says one as he works with both hands on a rope tied to the sail and around the yard. I feebly worked at the knot with one hand as I clung with the other in a death-grip.

Death-grip.. I’ve heard of that before but only then realized what it REALLY means.

The man to my side says, “I’ll get that, ye lubber!” not unkindly and he smartly completed my work. The sail instantly bellied out further with a monstrous thump and the mast leaned a little more over the sea. The men began their descent to the deck. Tightly between two, I made my way towards the centre and then down to the foretop and then to the deck. I didn’t look down, the others guided my feet into the places on the rope ladder..

Men on deck then took hold of other ropes and I looked upwards as the yard was hauled up and the sail became flatter. The ship leaned over some more. I was not feeling well at all.

As I stood there, the men around me quietly said, “Thanks for the drink!” in turn, and I remembered half of them as being in the press gang that took me. Cocked hat then stood before me and said, “A prime topman, are you?” “Well,” I say and the mate who struck me says, “Oh Sir, he’s just recovering from drinking his bounty! He can hand reef and steer with the best of us, but he can’t hold his drink!” and they all laughed, cocked hat too.

Now Doctor, I CAN drink and I need quite a bit before I feel it. I never took the bounty, never saw a penny of it and never had a drop of the ale it went for except for the half-pint they poured over my head after they beat me senseless and before they dragged me aboard!

Well, they’re my mates now and, I wouldn’t want them to have any trouble on the bounty money and them telling those stories about me as a topman..

And, I find I don’t miss my Polly half as much as I should.

But I’m scared witless whenever I get any higher than a short flight of stairs!

I beg you Doctor, to appeal to the captain on my behalf, to allow me to serve in some other way than that which has befallen me!

And Sir, if you can, could you show me where the gunner’s daughter is? I find I may wish to see whether she needs a kiss or not.
Forever in your debt,
Todd E. Lickspittle
A Reluctant Topman.