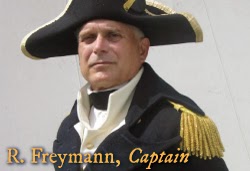 Captain Freymann:  Mr Hamilton, I see you’ve about completed your morning preparations – you’re ready to face the new day I presume?  Good.  With no further delay I’ll have her underway on starboard tack; we shall depart the harbour clearing the leeward cape without need to take a board to windward.  Carry on.

1st Lt Hamilton:  ALL HANDS, ALL HANDS, HANDS TO YOUR STATIONS, PREPARE TO GET UNDER WAY.  (more quietly, addressing the Master)  Mr. MacLachlan,  we shall recover the starboard hauser and hang by the port till I give the word.  Mind you do this smartly, not like last time.  HIS eyes are upon us.  Pray do not place young Moreton where you had him last time.  We cannot bear another drama.

(up forward the starboard cablet has been recovered from the buoy... The port one is still made fast but hauled short) 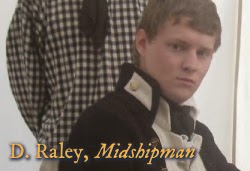 Midshipman Raley on foredeck:  Starboard cablet’s away and recovered sir!  Port is at short stay! (the port cablet is hauled short and is angled down at the same angle as the forestay)

1st Lt Hamilton:  forward there on the cablet...SLIP! (the inboard end of the cablet is released from the cavelle cleat.. Its end snakes over the side and through the ring on the buoy... The foredeck hands begin hauling it in)

1st Lt Hamilton:  (watching the ship gather sternway, her head being pushed to port by the backed staysail and foretopsail...) HAUL AWAY SMARTLY YOUR MAIN TOPSAIL HALYARDS SMARTLY!  CAST OFF YOUR DRIVER BRAILS!  MIDSHIPS HELM!

(the Acasta is sliding backward away from the buoy, turning her head away from the wind to port.  As soon as she’s about 60 degrees off the wind, the 1st Lt centres the rudder, and begins setting sail to drive her forward...) 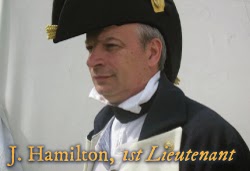 (the frigate stops her sternway under the forward drive of the sails.... Now the forward gear is no longer pushing back and to port, but pulling ahead.  For a time the frigate is stunned and makes only leeway, a boil of turbulence rising to windward of her... Then she starts moving forward...)

1st Lt Hamilton: (to the master)  Mr MacLachlan – meet her there – hold to the weather side of the channel, steer a fair course out....

As the frigate gathers way the leeway decreases.... With yards braced hard on starboard tack she slowly accelerates and begins answering her helm.   The 1st Lt glances at the Captain who has been standing aft during this... And gives an imperceptible nod.

1st Lt Hamilton: (to the Master)  Mr. MacLachlan, I’ll have t’gallants and upper staysails on her...carry on.

It all seemed to go well;  much relieved, the 1st Lt turns to write up the deck log.  Glancing astern, he is horrified to see a boat, his ship’s launch, struggling to keep up but being left behind by the gliding frigate.  He had forgotten to recover the party he’d sent to the buoy....  His eye darts to the Captain, who of course had not forgotten the boat, and is staring at him with his right eyebrow arched, arms folded, and an indecipherable expression on his face.

The 1st Lt gasps and stands frozen with the slate in his hands.  The afterguard all avert their expressions.  Mr. MacLachlan, the master, turns his back and squints at the foretopmast head, privately wondering what the service has got to....

The beginning of another day.