A letter home from the Surgeon's Mate 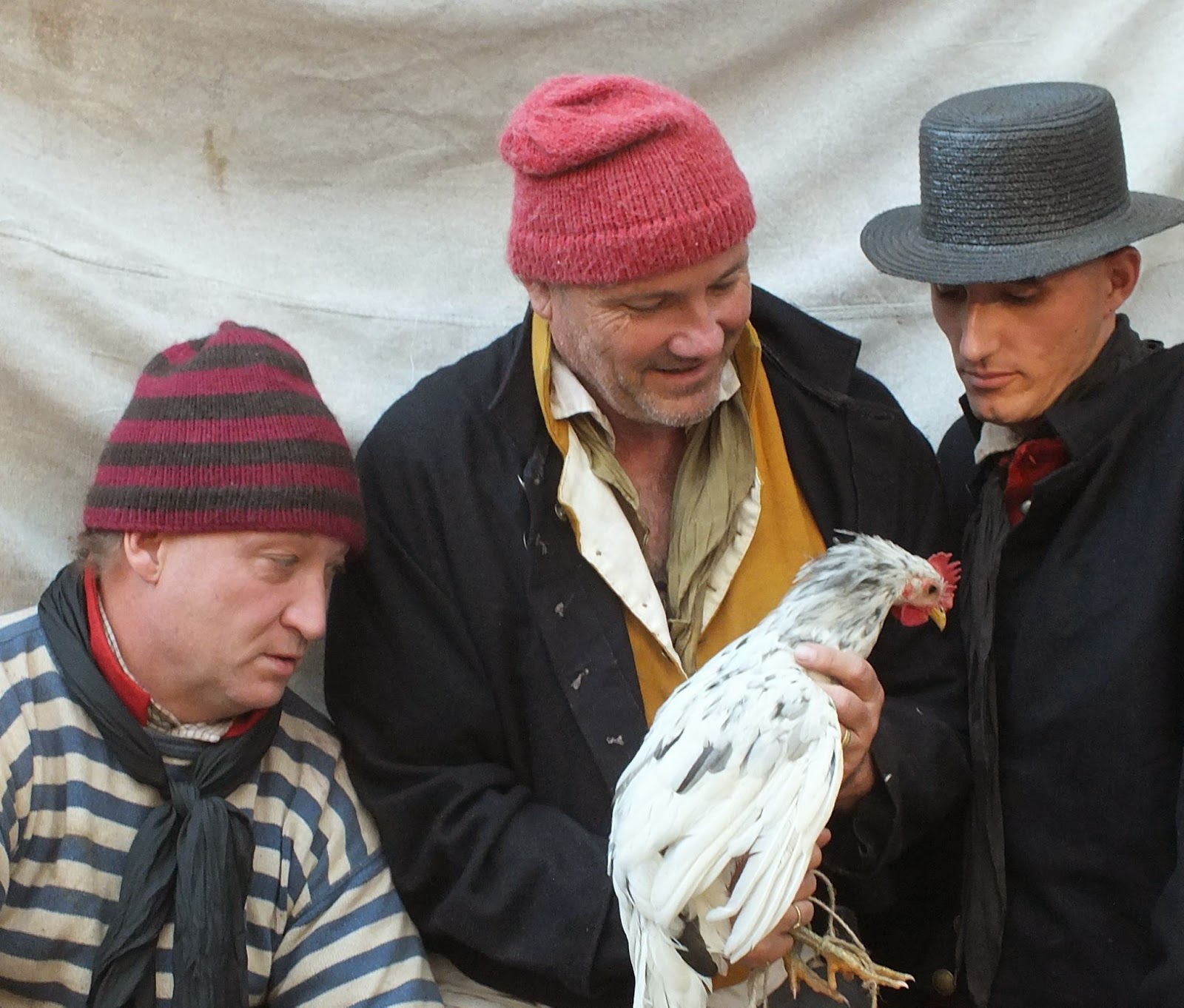 It has been some time since I have written. All my other letters to you are still here in my keeping, perhaps they all shall reach you at the same time. If Mr. Clark is reading this to you ask him if he does not think my English writing has become much better?

We have had a stroke of good fortune since last I have written. Several days ago a topmast man spied a sail just at dawn. The other ship also must have spied us, for they changed their course to avoid us. This said to us that they were Jonathans - this is how we call Americans - and we gave chase.

A chase at sea is not as many would expect, for it is slow- very, very slow! All day we chased after the prize with hardly any noticeable gain. The blockade duty is so very dull and tiresome that now all among the crew become tense with excitement. Every fellow does his job with a will and as fast as possible. Some whistle to try and increase the wind, this is a superstition among them. All eyes watch the prize like a wolf watches a sheep, but still the distance between us seems the same.

By dusk the topmast men say they are certain we have gained on the prize. Night falls, but fortune is with us for the moon is full and the sky clear. Throughout the night each watch keeps careful track of sails before us and at dawn- smiles on everyone- for even the landsmen among us can tell we have gained upon the prize.

All that day we gain steadily on the prize. Throughout the day the prize is won and lost a thousand times as all among the crew judge the set of their sails and ours, the strength and direction of the winds and currents and a thousand other parts of the chase.

That afternoon I am below deck when I hear a cheer from above. As I start to go up a sailor shouts down "They've started their water over the side!". When I go to the rail I can see they are pumping their water- the fresh water- over the side to lighten their ship. This means they have become fearful they cannot escape. They soon begin to throw many things overboard and each splash is greeted with a cheer from the crew.


Still we continue to gain on them, but ever so slowly. Everyone that can be is on deck now. The officers now question one another - should this sail or another be adjusted, how much longer do you think, do you think they will strike right away or fight? Only our Captain seems serene. He comes and looks from the quarter deck with his spy glass, perhaps gives an order to an officer to make some small adjustment of sail- which all rush to obey- and returns again to his quarters.

As we are watching the Jonathans throw more things overboard a topmast man who is my friend- Araiza is his name- slides down a ratline to where my friend the carpenter, Apple, and I are standing. He tells us that our course is going to take us through the path of those floating things they have tossed overboard. "Perhaps we should do a bit of fishing" Apple says, goes below and comes back with two grapples with lines. Joshua Wilson, who is known to be skilled with this sort of thing, comes back with him also with two grapple lines.

We are on the starboard side and all other eyes are on the prize to larboard.

Araiza goes back up to direct them where he thinks things will come closest.  The first things that float past us look worthless or hard to catch, barrels and crates and such. Then Araiza calls that there are pigs coming, and soon we see them floating. They had either been killed before they were thrown overboard or they drowned. 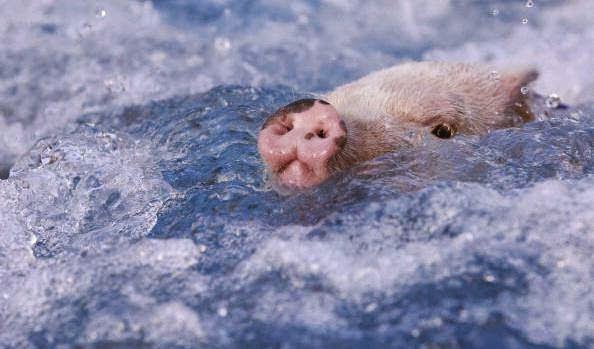 As the first pig comes past Wilson throws the grapple past the pig, then pulls it in as fast as he can. Suddenly he gives it a yank as he thinks it is close to the pig, but the pig rolls and the grapple comes over the top of the pig. Apple's throw lands too far behind, I throw and land far short. Wilson puts a foot on his first line and grabs the second, but our prey is past us now.

Araiza calls that another is coming and we move forward some and soon see it. A large white pig with black spots, but further out. Wilson throws hard and lands his grapple just past the pig. He heaves back hard and - luck is smiling on us - the grapple holds. Apple throws, his line crosses Wilson's, hauls back and also hooks the pig. I throw and fall short again.

Araiza calls out that a chicken coop is very close. I run forward and see it right alongside. All I have to do is lower the line to catch it. The grapple catches easily on the bars. It is heavy, but not too heavy to haul up by myself. It is filled with drowned chickens.

"Belay that and help us Frenchy!" calls Apple and I hurry to help them. Now the pig is alongside. Apple hands me his line- the pig is heavy! - and takes another. He drops it over and, after two tries, catches in the pig. "Easy now boys" he says and we begin to carefully haul up the pig. Araiza has now come down to help us.

Just as the pig is almost to the rail Wilson's grapple pulls loose. He and Araiza each jump forward and catch a leg and we all heave the pig onto the deck.  We give ourselves a little cheer and from above us we hear a voice say "Mr. Apple, what are you about?" The Captain is on the quarterdeck above us!

We all step back to salute him and he see the pig. He almost smiles "Well, you've fished up Brother Jonathan's pork. Well done" he says. Just then the sound of a gun- the Jonathans have fired a ranging shot- far short. Now even the Captain has the wolfish look and he hurries to larboard. 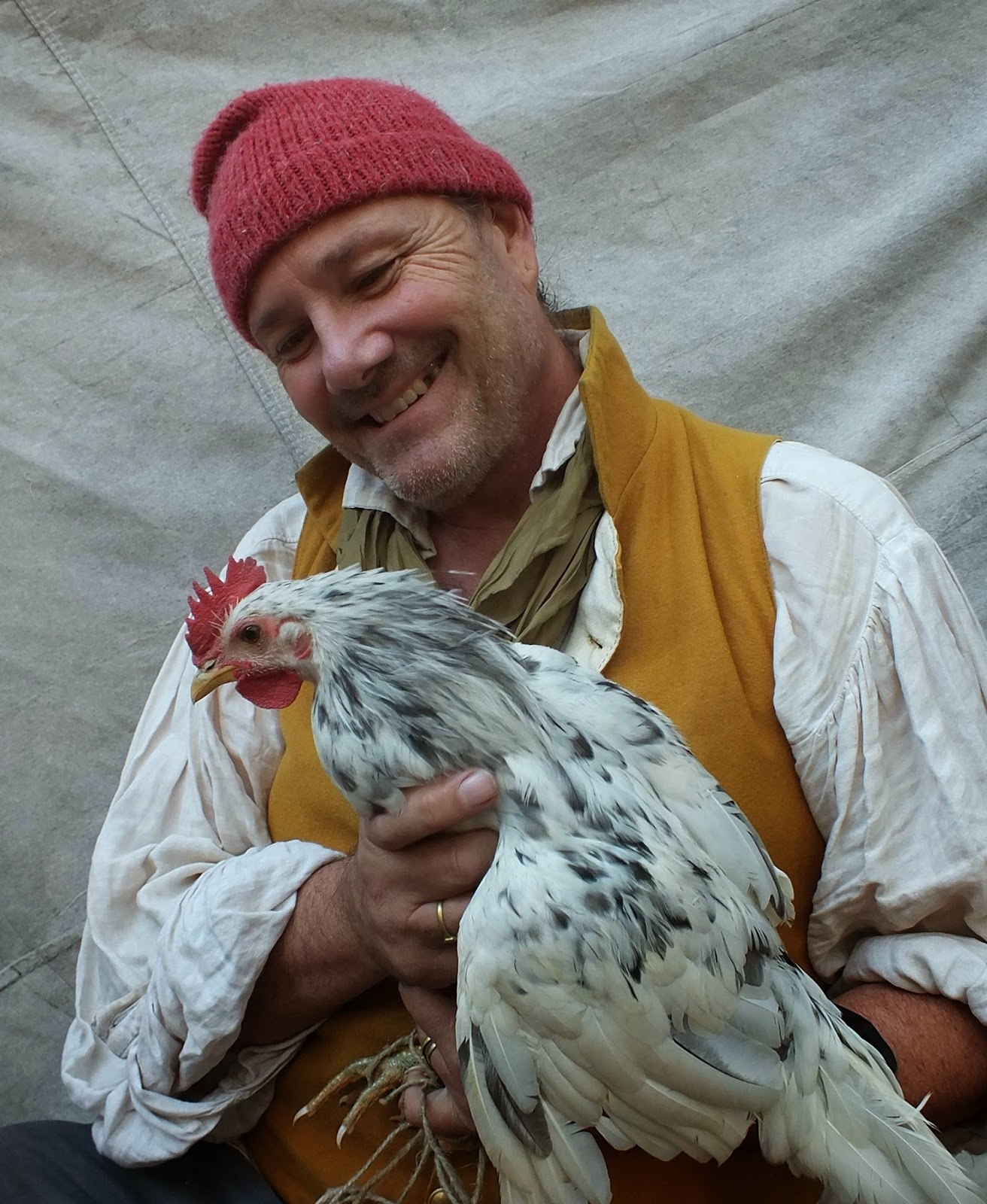 Everyone moves toward quarters even before it is called - which is right away. I take the coop with me to the orlop deck and I am surprised to see that three of the chickens have revived.  Eight others are drowned. I have plenty of time to examine them after the doctor and I prepared ourselves and - wish me joy Marie! - they are not dunghills but game cocks! And not just any gamecocks but the Delaware Blue gamecocks that are so famous among the Jonathans! I recognized them by what I have heard of them. I have one splash hen, one splash cockerel and one blue cockerel. The other chickens go to Araiza, Wilson and Apple less one we give to the Doctor for his indulgence.

We took the prize without a fight. They had a fever among their crew during their crossing that had carried off many. Being short handed they struck as soon as we came within range and fired a single shot from our bowchaser guns.

So more prize money is due me, but I am happier with the Delaware Blue Cocks. How happy Mssr. Rochambeau will be to receive some of this bloodline!

But how much happier will I be to again be home with you and the Boys! I miss you all with all my heart!

Ever your loving husband,
Baptiste