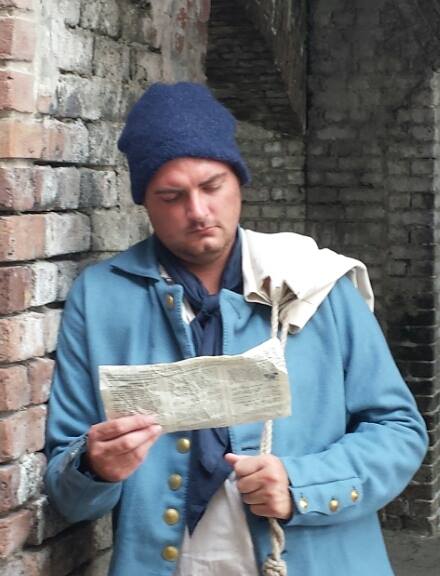 Will Miller (as portrayed by Cody Miller) comes from a long line of fighting men in His Majesty's Army, Navy, and Marines so it was no surprise when he enlisted in the Army and was assigned to His Majesty's Royal Field Artillery.  He served with distinction and returned home at the end of his enlistment where he shared stories of his service and engaged in good natured ribbing with his cousins who had served in the the Royal Navy and Marines.  Despite the ribbing, Will was captivated by his cousin's stories of his service in His Majesty's Navy.  The   peaceful time at home didn't last long before talk of war with Napoleon spread and it was time to serve again.  The allure of world travel and the ability to utilize his artillery skills led Will to enlist in His Majesty's Navy where he was assigned to HMS Acasta.

Email ThisBlogThis!Share to TwitterShare to FacebookShare to Pinterest
Labels: Images