Being a remembrance of HMS Acasta Carpenter Mr. Jas. Apple 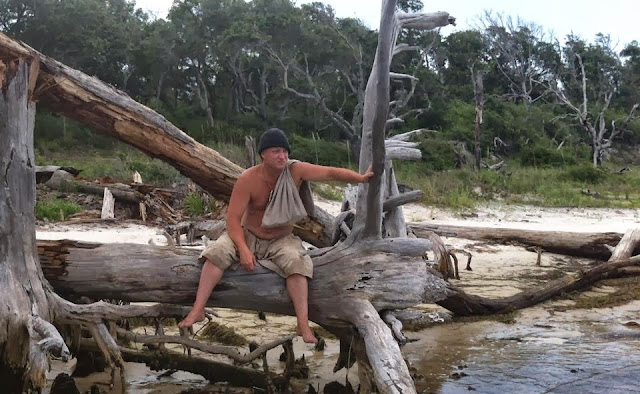 "Once when when sailing past a unseen cove of the island of---------- and serving as a carpenter's mate on my first ship the Tsalagi, and doing the chores of the day, found myself aloft helping to repairing a damaged foremast yard and we had just begun bending the sail when a French vessel came upon us blind from her cove and took us completely by surprise, taking out the foremast and the rigging above the foremast was taken by bar and chain and the damage being done made a mess of our repairs.

As we were in a better position for wind, we made for open water and having beaten to quarters we made ready for battle and I was given the duty of staying aloft to help with the setting of the forecourse. At which time the foremast gave way taking five of the seven topmen, leaving us without the captain of the tops and the shrouds taking hold of my right hand making it all but useless with only the use of me little finger and thumb. Being that only two men, myself included remained and those above lost, we watched as we hurried doing very little good and even though having lost or damaged sails we made good wind and soon found a reef that stopped and tore us from our race.

This having been done, the French, having decided that we were not be taken as a prize, set about the work of finishing what damage had been so graciously done by the reef. My sail gave way and set me in the warm waters, but to my luck the mast being of wood acted as good as any boat and although being quite a bit wetter, saved my body although beaten and crushed. As luck would have it I was able to conceal myself from the French guns and marksmen by concealing myself under one of the sails, and as the French wanted nothing to do with the reef and she departed in safe waters.

As the tide raised what was left of our ship it also pushed my raft of sail and oak towards the shore that I could clearly see but dared not try to make. As it would turn out much of the provisions would scatter themselves upon the beach for miles as well as many of my fellow ship mates, the others having been taken by the deep and given to God. Those of us that were spared made quick work of being shipwrecked and buried our dead and made houses from the sails and rigging.

We were not for want of food, and clean water was found not far inland at a nice pooled spring, which by chance was a good place to make meat to add to the diet of fish and crabs. A good supply of dry powder and shot and a number of serviceable muskets allowed us to hunt and defend ourselves if necessary

It would seem that my fingers would benefit from being removed and with my rigging knife having just been sharpened I chose to loose them for fear of loosing more. Having butchered foul and beast I showed them on some sort of lesser of the monkey family that we had gotten with shot while it lay sleeping aloft. I must admit it was a bit odd instructing the fellows on how to pull back the skin and go into the joint and they did the monkey so bad as you could see it that I thought it better for me to cut off my whole hand. But they had better luck with separating the creatures elbow that I had some faith restored that I might save my hand and they made quick work of it and were able take the skin and pull it back over the knuckle, tying them shut with small threads from of one of the wild pigs backstrap that we took to eat, and if you were here sharing a gill with me now might remark how nicely they set, only loosing those three tips.

Being the carpenters mate and no carpenter gave me a sort of promotion to ships carpenter, but without no ship and orders to back me up it was just a honorary rank. And having said this the old tar by the name of Collier set with another hauling spars and any parts of the ship that might perchance be of use for the houses, others set about collecting lines and canvas. He did complain as he had done on sea and now on land about any work. So we set him to the most lesser of all tasks and as a result he was stricken if not by God by fate with the nastiest of saddle boils, which took directly to weeping.

Once he had something real to be sick and miserable about he soon lost all interest in burdening those around him with any of his aches and pains, and morale was greatly improved."

Email ThisBlogThis!Share to TwitterShare to FacebookShare to Pinterest
Labels: Apple