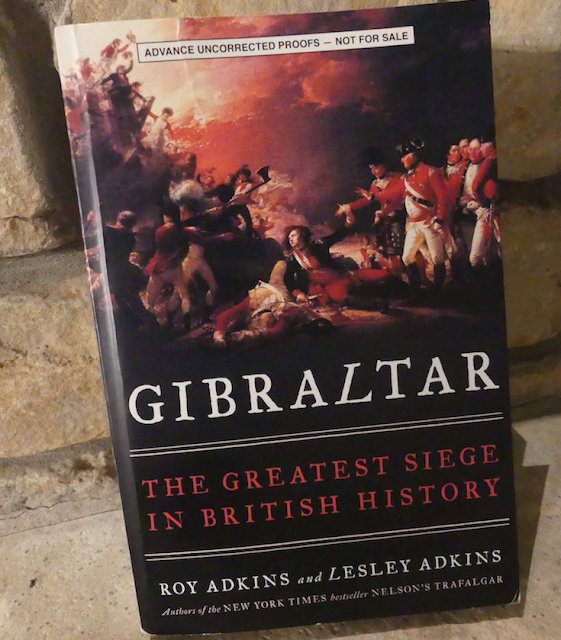 Like most Americans I am abysmally ignorant of world history. All I really knew about Gibraltar was that it was, at one point, key to controlling sea trade between the Mediterranean and the Atlantic, it was rocky and that it had been under siege. What a story that siege was!

The siege lasted three and a half years, the longest siege in British history. Spanish forces blockaded the peninsula by both land and sea. While supply ships did sometimes bring relief supplies, for the most part the inhabitants of Gibraltar were on their own. The fact that they outlasted and persevered is real testament to human endurance. It’s a riveting story and this husband and wife team tells it well.

The Adkinses write in a non-academic style which is very readable, a pleasant change from so many books dealing with historic topics. Serious students of history need not fear however, the authors provide plenty of direct historic quotes. In fact, the quotes from several different reoccurring characters was one of the aspects that really put a human face on the story for me. Another aspect that I appreciate is that the Adkinses don’t let military tactics and maneuvers become the dominant theme. While the military situation is thoroughly covered, the events and conditions for the civilian inhabitants of Gibraltar are given equal treatment.

Where background explanation is needed the authors provide brief digressions which are interesting and never so long or detailed that they detract from the main storyline. Just as with a novel, I often found myself reading longer than I had intended at a setting to “see how things turned out”. The book also includes an excellent set of maps which are arranged from larger to smaller in area. I found myself referring back to these for better visualization when military maneuvers were being described.

In summation this is a very interesting story well told, and I highly recommend this book. For most of us Acastas the siege was well within our adult historic lifetime and aspects could be included in a persona backstory. If you’re just a history buff this book is still a great read. And for all you Americans out there-the siege of Gibraltar has a direct bearing on our independence totally unknown to me! Read the book to find out…