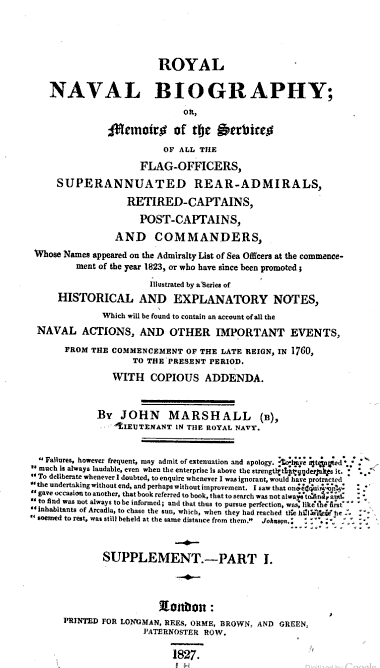 This officer entered the Navy, 1 March, 1797, as Master's Mate, on board the El Corso 18, Capt. Bartholomew James, with whom he served, in the same vessel and the Canophs 80, on the Mediterranean and Lisbon stations, until Sept. 1799. During the next three years and a half he was employed off St. Helena and in the Downs and West Indies on board the Director 64, Capt. Wm. Bligh, and Leviathan 74, flag-ship of Sir John Thos. Duckworth. He then, in March, 1803, became Acting-Lieutenant of the Racoon 18, Capt. Austen Bissell, and while in that sloop, to which he was confirmed by commission dated 8 Sept. following, we find him in the course of the same year participating in a very warm action of 40 minutes, which terminated in the capture, in Leogane Koads, of the French corvette Le Lodi, of 10 guns and 61 men—contributing, also, to the destruction, off the island of Cuba, of the national brig La Mutine, of 18 guns—and further present, with distinction, in an action in which the Racoon, with only 42 men on board, most gallantly took, notwithstanding a long and desperate resistance on the part of the enemy, a French gun-brig, cutter, and schooner, carrying altogether between 300 and 400 men. I

n 1805, Lieut. Lawrance—who had for some time had command of the Gipsy schooner of 10 guns, and been also employed in the Echo sloop, Capt. Edmund Boger—successively joined the Acasta 40, Capt. Rich. Dalling Dunn, Hercule 74, flag-ship of Rear-Admiral Jas. Rich. Dacres, and Theseus 74, Capt. Fras. Temple, all on the West India station; and he next, from 10 July 1806 until 15 July, 1808, served with the late Sir Sam. Hood on board the Centaur 74.