A Bug-a-boo to Frighten John Bull 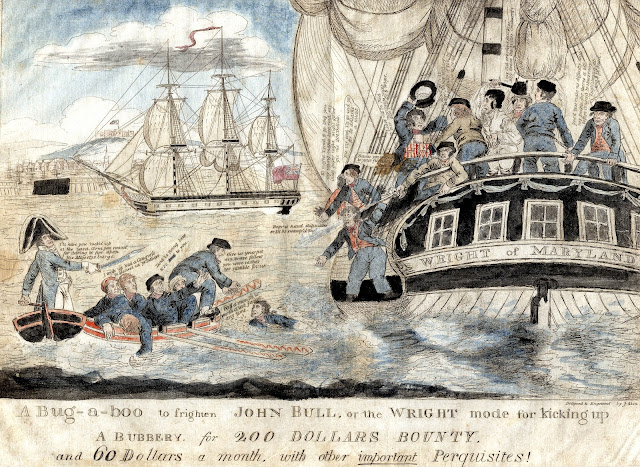 The British Museum Catalogue describes A Bug-a-boo to Frighten John Bull... as follows;

Apparently an American print. In the foreground is an American merchantman, the poop towards the spectator and crowded with men of un-nautical appearance; she is inscribed 'Wright of Maryland'. A few yards off is a naval ship's boat inscribed 'Revenge' in which a British officer, wearing a large cocked hat, stands, cutlass in hand, holding the tiller. There are six oarsmen.
A man on the American vessel tipsily fires a pistol at the boat; the officer shouts: "I'll have you tuck'd up at the yard Arm, you rascal for daring to fire upon His Majestys barge."
The man answers: "Damn you Majesty & your furbillo'd hat."
One of the sailors, apparently hit, hangs lifeless over the edge of the boat. One American seaman swims towards the British boat, saying, "60$ a month is worth a wet Jacket any time"; a sailor prepares to help him in, saying, "Give us your fist my brave fellow you were rather too nimble for us".

Two of the other British sailors say: "Dont be firing here & be D------d to you" and "I wish we had a Congress to Hansel us ye Dollars".
An American seaman is about to drop overboard; he says to the British sailors: "Bear a hand shipmates or I'll be swamp'd too."
Behind him are a Negro and an Irishman; the former says: "Ki massa I grad fo go long you my nooung massa been read say inney paper massa Wright gwine gie me 200 Dollah." The Irishman says: "Bie my sowl I'll go wid ye for 60 dollarhs a munt."
One seaman seizes another, saying, "you shant go Nat sister Nabby will cry dreadfully if you be not to home." The man pushes him off, saying, "Leave me be Ned our marchents wunt give me 60$ wages." A third (with deformed hands) brandishes a saucepan, saying, "Rascals", while a fourth says to him: "I say Old crooked knuckles why heave the skillet overboard?"
On the extreme right the master of the vessel looks towards the British boat, saying, "You'd best make no difficulty with my people, for there's a bill before Congress, to shoot every Englishman at 200$ pr head."

The sails form a background to the men. In the middle distance is a British man-of-war to which the barge belongs. Behind is a harbour with vessels at anchor, backed by the houses of a small port; behind are cliffs surmounted by a castle flying a British flag. c.1806

In addition the following note has been added to the online catalogue;

The date being uncertain the situation is obscure. 'Wright' is probably Robert Wright (1752-1826), senator, and Governor of Maryland, a strong Jeffersonian, who introduced a Bill in 1806 for the protection and indemnification of American seamen, and supported measures for the protection of American commerce and the prosecution of the War of 1812 with Great Britain. Desertion for higher pay was in general from British to American ships. The tension between the two countries was great and increased until the outbreak of war.

Don't forget:
Pressgang Week features special posts TWICE A DAY.
Come back at NOON (cst) for the next post!
Enter'd into the log by HMSAcasta.com