A Letter to Upper Canada 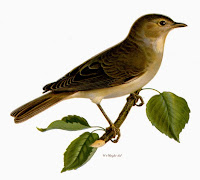 I should like to thank you for your letters carrying the news from Upper Canada. News upon the blockade, as you may well know, can be infrequent and frustratingly slow to arrive.  The most recent Mail Packet arrived from Halifax last week and I found myself the recipient of a great deal of correspondence. Among the letters were a goodly number of notes from friends and family offering their well-wishes upon the occasion of my recent marriage, two eager letters from the new Mrs. Roberts herself, an invitation to give a lecture at a French surgical institute, several requests from colleagues on matters of Physick, and a congratulatory letter from Sir Joseph along with a box that contained the gift of a single, well preserved sylvia moltonii from his collection. The sylvia moltonii as it seems, has a geographic range you may find of interest.

Things here in the North American Station have been quiet for the past few months, save my wedding at the beginning of October, there has been little activity to speak of. My dear Mrs. Roberts has had a good deal of the remaining food from the wedding sent with us back to the ship. There has been so much that I have been able to treat the wardroom to dinner for weeks. We have dined on ham, chicken, meat pasties, apples, cheeses, grapes, various pies and cakes to such an extent that it borders on gluttony. We have only just begun to deplete the supply!

The long, slow days and light duty have given me ample opportunity for contemplation. Lately I find my mind turned to moral and philosophical dilemmas. There is a philosophical question that I should like to pose to you, as I hold your opinion in high esteem.

Let us say that one man were offered an opportunity to potentially end the war against Napoleon's forces in a single stroke. Say, for example a British agent could be positioned in such a way as to be able to poison a single man, and in so doing, save thousands of lives. The lives spared would be not only English, but French and Spanish alike. It could spare carnage on a massive scale. Would this hypothetical agent not be obliged, for the very sake of humanity, to undertake this morbid task, no matter how repugnant it might be to his nature or counter to his beliefs and profession? Do the lives of thousands outweigh the life of one, no matter how vile the individual?

I need not explain to you how desperately spread thin our forces are, fighting wars in America and Europe, nor the immense cost of such wars to the Crown in men and materials. But if the death of this one hypothetical man were to occur, and thousands could be spared in Europe, could not those forces then be brought to bear in a single, undivided force against the United States, ending that conflict in a more humane and timely manner, sparing countless more?

In these dull times I cannot help but let my mind wander to these places, perhaps a line or two from you on the matter will ease my mind. Until then I shall wish you all health and success and know that if I might be able to render you any acceptable service, you have but to request it of,