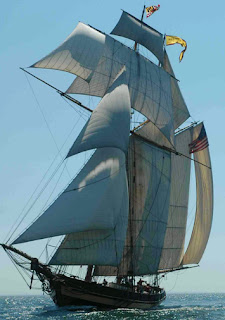 From their website:  One of the most famous of the American privateers was Captain Thomas Boyle, who sailed his Baltimore Clipper, Chasseur, out of Fells Point, where she had been launched from Thomas Kemp's shipyard in 1812. On his first voyage as master of Chasseur in 1814, Boyle unexpectedly sailed east, directly to the British Isles, where he unmercifully harassed the British merchant fleet. In a characteristically audacious act, he sent a notice to the King by way of a captured merchant vessel that he had released for the purpose. The notice, he commanded, was to be posted on the door of Lloyd's of London, the famous shipping underwriters. In it he declared that the entire British Isles were under naval blockade by Chasseur alone! This affront sent the shipping community into panic and caused the Admiralty to call vessels home from the American war to guard merchant ships which had to sail in convoys. In all, Chasseur captured or sank 17 vessels before returning home.

On Chasseur's triumphal return to Baltimore on March 25, 1815, the Niles Weekly Register dubbed the ship, her captain, and crew the "pride of Baltimore" for their daring exploits.