How Do I Avoid the Press Gang?

A Gentleman’s guide to staying out of His Majesty’s Royal Navy. 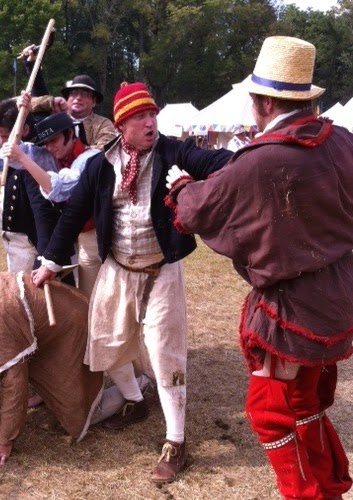 Press Gang [n.] A company of men under an officer detailed to force men into military or naval service.

The ships of the North American Station have been operating for some time without the proper number of sailors to man them. Yesterday, Captain Freymann was summoned aboard the Valiant where we were ordered to break off from the blockade of the port of Baltimore and assemble a party to go ashore at New Boston at the end of this current month.  We are to bring enough men back with us to make use of aboard the Acasta and distribute the rest to the other ships of the blockade.

Our intelligence indicates that there is to be a great fair held there, and a fair is an excellent opportunity to clap onto some prime hands.

Fairs were considered one of the best places for the British Navy to press new sailors because there were always plenty of young men in attendance eager to spend their money and impress their ladies. How do I get out of it you ask?

1.) Be extremely young or very old.
There actually were age restrictions for pressing sailors into service. Generally they avoided the very young and very old, but in times of a ‘Hot Press’ like during wartime, sometimes these restrictions were overlooked to meet quotas.

2.) Have money in your pockets to buy your way out.
Gentlemen were supposed to be exempt from being pressed and could buy their way out of service OR they could get out of it by offering up one of their male servants in their stead. Make sure to have plenty of bribe money in your pockets!

3.) Be sick or otherwise deemed unfit for service.
You‘ll have to be able to pass a rudimentary medical exam by a Navy Doctor to be admitted into the service. If you’re unwell and a risk to the rest of the ship, or have some other sort of dangerous pre-existing condition that renders you unfit for duty, you’re free to go.

4.) Run like mad.
Seriously, if they can’t catch you, they can’t press you. 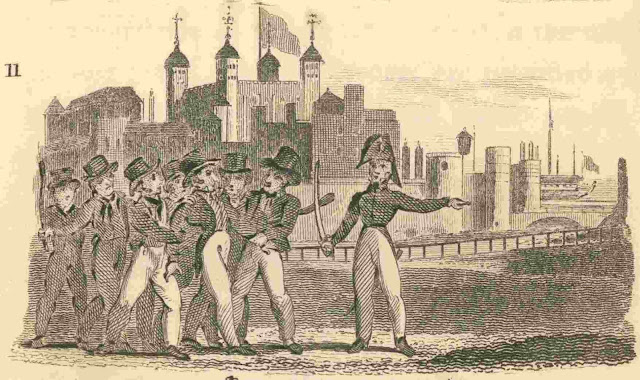 From the Custom House it is but a few steps to Tower-hill.  Well, there is a view of it, and of the Tender, which is an old man-of-war, riding at anchor on the Thames, for the purpose of receiving impressed men for the king’s service.


Say, Mr. Lieutenant, before I surrender,
By what right you take me on board of your tender?
In the peaceable trader I rather would be,
And no man-of-war, Sir, I thank you, for me.

From: City Scenes, by William Darton
Transcribed from the 1828 Harvey and Darton edition by David Price