A letter home from Baptiste 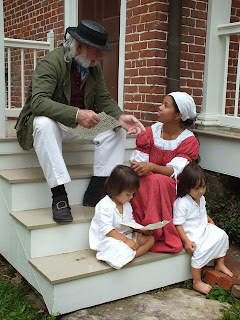 The blockaid drags on and you are never far from my thoughts. I think my English writing as become very good now, ask Mr Clarke if he does not think it is so. I have no real news, so I will tell you of religion and our Chaplain.

Our Captain seems like a devout enough fellow, but he is not what the English call a Blue Light Captain. That means a Captain so devout that he will have a fellow flogged for cursing or something similar. Other Captains are much to the other way, they carry no Chaplain and read the men the articles of war each week. These are the rules by which the English govern their sailors. I have already heard them more that I care to- for any offense it seems a fellow can be put to death.

We have a Chaplain, Reverend Griswold, and I like him very well. Each day he makes a visit among the sick and injured, offering them encouragement. He often writes letters for the men and I do not know that I have ever seen him chastise one for his misdeeds. I will tell you how he goes about correcting them.

A sailor named Bill Holder had talked loud and long of the girls in Bermuda- he had been there before- and all the things he would do when we wintered there. The closer we came the more he spoke of it. At last when we are  in port he and his tie mate are waiting for the ship's boat to return, as they are in the next lot to have liberty. The Reverend Griswold come up and puts his hand on his shoulder "Bill" he says" I'm sure there is a packet heading back to England from here. Anytime you wish I will help you to write a letter, I know you must miss your wife and daughters terrible fierce". As soon as the reverend goes Bill takes some coins from his pocket and gives them to his mate "you go kick up Bobs a dyin for me Willie, I need to go cypher out what to write to Mary and the girls" he says. If he ever went ashore in Bermuda  I never new of it.

When they have a service the Catholics abord, and there are more than you would suppose with the Irish, and the few Spaniards and Portugese, go to an other part of the ship. Some say a few rosarys, but mostly we would just talk among ourselves.

One day when he was visiting the sick the Reverend says "Mr Baptiste I would like to invite you to attend our devine service on the marrow".  I asked did he not think this was improper, since I was a Catholic.  He says " No, if you would just refrain from making the sign of the cross- so that none would be offended- I would very much appreciate if you would attend". So I have gone that day and every time since. I find if I cross myself quickly after a prayer none seem to notice. Sometimes the Reverend will read a sermon from some other Reverend, but most often he speaks his own words. I have learned a great deal about prodestants. They believe they may pray directly to God without the intercession of a Priest, Saint or Reverend. This seems strange to me for a people who would never even think to speak to the Captain unless summoned or spoken to first- and how much greater is God that the Captain- and yet they may call for his attention as they wish? 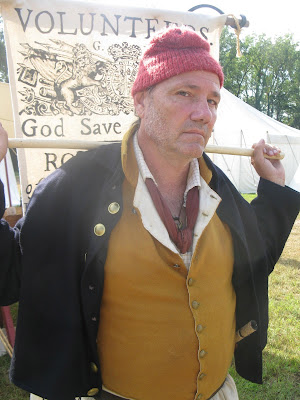 This also seems to me very much like the ideas shouted by those in France before the Terror- that none should be held above another and such- before they murdered everyone more learned and wealthy than themselves. I wish I could talk about this with someone, but of course there is none that I could. My friend Apple perhaps.

Yesterday the Reverend says to me "Mr Baptiste I appreciate that you have been so regular in attending divine services" and I say that I find them very interesting- which is true. He says to me "Seeing  you there each time reminds me to pray for your conversion" he says this with a smile, so I think he means it for a jest. As I said I like him very well.

I have now written my self out for the moment. I pray that this war will end and I will be with you and the boys soon,

Ever your faithful husband,
Baptiste