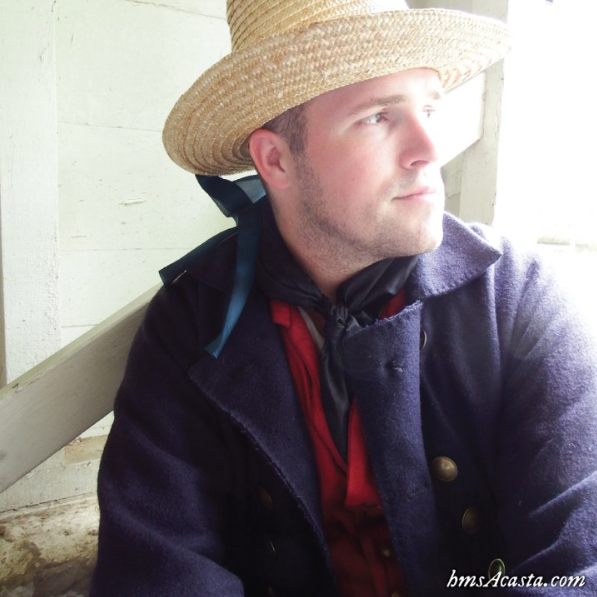 The letters for the sailors are beginning to roll in from you, our readers! I received a box full of letters from Melissa Alexander just the other day. Melissa taught a period letter writing class, and the assignment she gave her students was to pick and Acasta from the list of those that planned to attend the Jane Austen Festival in July and write a period letter to them.

But ONE sailor in particular got left off the list of attendees and now he’s woefully short of period correspondence! One of our newest fellows Mr. Johnson, as seen above.

Nathaniel Johnson was born in August of 1770 in Cawsand in south eastern Cornwall. He was the first son of three children to his parents Theodore and Melissa. His father was a priest for the Rame parish of which Cawsand was a part. Growing up near the sea and overlooking Plymouth sound and Rame Head, Nathaniel saw ships entering and leaving the bay while at home and  traveling with his father to the parish church in the hamlet of Rame. Theodore intended for Nathaniel to enter into the Lord’s work when his time came, however Nathaniel had a different calling in his heart. Listless and not ready to settle,  Nathaniel signed onto the Busbridge in 1784. The East Indiaman was headed to the Cape of Good Hope, then onwards to Calcutta and these seemed as good a place as any to start his adventure. The next few years were spent in the service of the East India Company making several voyages between England and India. In Plymouth, after returning from one such voyage in 1793, he heard of the hostilities with France. Caught up in the fervour of war, he left the East India Company to join the Royal Navy. Nathaniel was rated as an ordinary seaman on board the 24 gun sixth rate HMS Squirrel in 1794 and departed England for convoy duty in the West Indies. When the peace with France was settled in 1802 Nathaniel was paid off and left the service. Thankfully, the peace did not last long and Nathaniel found himself in Guernsey in 1803 where he was signed on board the HMS Acasta.

Letters need to be in to me by the first weekend in July for them to be processed and placed into the packet for delivery. Email me for my address at: