There was a time on North American Station that we was on some very queer business. We would anchor at New Boston Towne in the Unighted States, sometimes for several days at a time, and the Captain or the Doctor would go ashore, sometimes both. Then we might sail up coast or down coast for a day or two, anchor at some small port while one or both went ashore. Then back to New Boston Towne we’d go for another several days. A couple of times the Doctor sent his pet Frenchman ashore alone. They was all mum about whatever business it was, but the Captain looked rather grim at the time. All in all it was about a month this took.

While we was in New Boston Towne they give us shore leave by watches. Now this may seem strange, and I suppose it was. Most often you will not get shore leave in a foreign port where they speak English for fear of fellows taking French leave. But as I have said before the Acasta was a happy ship, and the Captain firm but fair, and that is what he done. The Lieutenants was all rather grim about it at first, threating to end leave for everyone if the first fellow even turned up late, but we all knew we had a good thing going and kept a watchful eye on each other so as not to spoil it. Before it was done even Jake Booke got leave to go ashore- and he had been flogged for running before and getting caught. 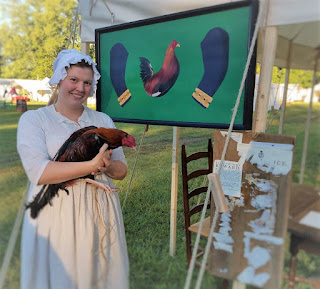 Now in New Boston Towne was a tavern- not a real house style building but one of those which is all canvas and planks, but a tavern none the less and your common tar only cares for being out of the weather when he has a pint- that was called “Lord Nelson’s Arms”.  This was before Trafalgar, but after Nelson had lost his arm at Santa Cruse. That name probably earned them some hard feeling among the Jonathans because there was still plenty of bad blood from the war. They seemed right glad to have some true blue Tars come in. The place had a back room with bunks to rent and a cockpit behind it.

The gal that ran the placed called herself “Sally Brown” just like in the song. We all figured she was run from something and had changed her name- and we all thought she could have done a better job of picking a false one. Right quick Nate Johnson got a leg over on her. It looked like they had known each other from before, because anytime somebody called her ”Missus Brown” Nate would smile this sly smile to hisself. I heard  after the war they was spliced and still run a tavern in America to this day.

Right quick Sam Hollybrass got a leg over on her cousin that also worked there and from then on all of us Acastas was treated like we was family. Nobody went anywhere else when they got leave.

As I said they had a cockpit back of the place, and we had a line of some good old English birds aboard the Acasta. There was a Jonathan woman named Bickenhouser- in America there is no telling what you will find a woman doing- that had a line of birds that was local champions. They was called Delaware Blues, although most of them I seen were white with blue and red spots.

Well, we started fighting these birds, and you would have thought that would have made already bad blood between us and the Jonathans get worse. It done just the opposite. Both lines of birds was so game that there was never any telling which one would win when they was pitted.  One time they would win and the next match we would. Winchester, he knew birds, said he had never seen two lines so equally matched.

If the Jonathans had won, some Acasta would exclaim, "Say cousin you are so flush now how about buying a poor tar a pint?” and some Jonathan would buy a round for all. If we had won some Jonathan would say "Here now John Bull, why be so tight with your winnings when we are all so dry?” and we would do the same. It was jolly times.

Once as I was putting on my shore going rig Apple the carpenter passed by.  I was singing to myself and in high spirits.  “So Cullen” he says “you're off to Fiddlers Green are ya?”. And I reckon that was true. It was as close to Fiddler’s Green as any poor tar will ever come while on commission.

-James Cullen. Remembrances of Eight years before the Mast, 1834.

*** Fiddler’s Green was a mythical afterlife among sailors where the liquor and music flowed free, the girls were always pretty and everyone was always happy.