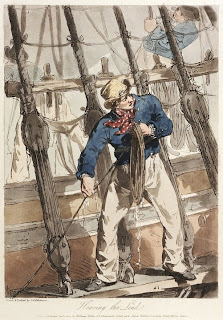 This young man has been subject to fitts ever since he was twelve years old in consequence as he says of being frightened by his sister coming suddenly into a dark Room where he was sitting with his father, dressed in a white sheet thro' a frolick. I have twice before today seen him affected and I think they were as severe and lasted as long as Fever witnessed by any one person. this lad is a perfect picture of health and I am informed diligent, and friendly in his disposition. From the great muscular strength that he possesses it required a great number of people to keep him from injuring himself while in a fitt. He tells me that he has no previous notice of the attack, only as he thinks he hears a rattling noise like falling waters in his ears, his consciousness then leaves him. The muscles of the neck, breast and abdomen become strongly convulsed, the eyes are turned upwards, and the agitation of the whole frame becomes excessive. The Tunica adnata of the eyes by this time are highly inflamed, the face becomes red, the jaws, unless something is got between them in Time, get fast locked for a short period, and in the height of the paroxysm if the precaution of putting a spoon into his mouth has not been attended to he is apt to lacerate his tongue very severely. By a profuse sweat breaking out on his face these violent symptoms subside, and he opens his eyes and generally stares wildly round him for a few minutes and sometimes will take a drink if it is offered to him, but if spoken to he very often falls into the same state again. He has now been nearly as I have been describing for these last eight hours. I have carefully watched over him and never could perceive that the pulse was materially altered nor the heat of the skin unless about the head. but always after the convulsions subsided, and when his consciousness was returning the heart throbbed most violently until he became quite recollected. I have endeavoured to be as particular as I can about his case on account of the genuine sympathy excited in the breasts of all who have ever witnessed his malady. -- 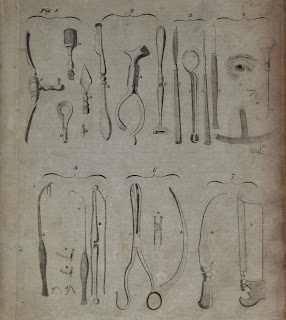 As the Pathology of this disease as well as our general knowledge of the laws of animal aeconomy are involved in much mystery, I am fearfull about hazarding a conjecture on the best mode of treating this case, yet as I will be obliged to do something, I will just say, that it appears from the time he first received the fright, he has been more or less subject to this disease; from the symptoms, which I have detailed it appears also probable, that some preternatural determination of blood to the head then took place, which by compression on the brain might have induced these violent, convulsive motions, and these may have since continued to recur by means of what some late eminent Physiologists have termed 'morbid association', even altho' the primary cause may have long ceased to act. I confess this reasoning is not very satisfactory, however it is the Best I have to offer. During the height of the Paroxysm, I tried to compress the internal Carotid by pressure with my thumbs, agreeable to the recommendation of the ingenious (Dr. Parry of Bath) but from the strong resistance of the muscles of the neck. I suppose I succeeded very partially, altho' he soon got quiet after I had begun and with an idea that they had entirely ceased I left him. 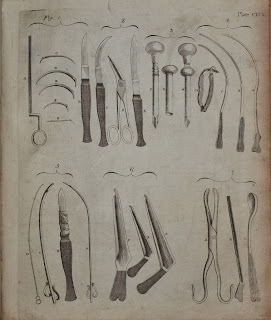 I confess this might be more owing to the natural termination of the paroxysm  than to any benefit devined from the imperfect compression I was enabled to use, but as it was agreeable to the theory I have detailed above I was resolved to try is as often as I could. The excessive violence of the subsequent attacks however totally put it out of my power to persevere in the compression of the carotids; with a view however to induce a new action (if I may be allowed so old a phrase) and set aside the morbid association, I tried by very strong compression with my hands on the spinous processes of the ilia (these parts being violently agitated by the contraction of the gluteal Muscles) and sticking in thumb nails on the ridge of the bones to excite pain there. Here I also thought I did some good. Because it appeared to me that a speedier termination of the paroxysms took place. The usual remedies of slapping the hands and the soles of the feet and bending back the nails of the fingers which are used by the vulgar on these occasions, and which were diligently persevered in here justified as I thought these conjectures of mine. As soon however as he is quite freed from the fitts I purpose bleeding him plentifully and then to administer half a grain of the argent: Nitrat. and daily increase it as I see it has lately been strongly recommended in cases of this description. I will notice the effects as I proceed.


Transcribed by Albert Roberts with spellings from the original journal imaes and text found at:  www.nationalarchives.gov.uk

Medical Instrument Illustrations from Copperplate engraving from the First Edition of the Encyclopedia Britannica, or Dictionary of the Arts and Sciences, founded in 1768 and printed in 1771.
Enter'd into the log by HMSAcasta.com