A Letter from the Field

Salutations and best wishes from the American continent. It is with pleasure that I am able to report that our mission to retrieve the documents contained in the Red lock box was a success. I selected a small party of Acastas to go ashore and together we were able to secure and destroy the secret plans contained in the box.

The party consisted of myself, Mr. Midshipman Raley, Able seaman Taylor & Haberfield and my servant Mr. Vassermann. You will be pleased to learn that each of them acted in a manner that did service to the Crown. We set up our camp far away from the Americans and even beyond the relative protection of the large British encampment.

On Saturday morning, 12th October, we discovered the location of the Red Box in the American Camp. Apparently it was being displayed in a tree by their commander's tent as a rallying point for their soldiers.

Having a shortage of men on the ground with which to mount an assault, and a relatively brief time to organize one, I bartered a deal with the pirates encamped down by the river to assist us. Taking the Bank of England notes I had been issued for just such a purpose, I paid each man that promised his involvement one pound as an advance in good faith.

While Raley, Taylor and Haberfield were making their way toward the battlefield, Vassermann and myself, followed by eight of the pirates, found our way to the back of the American camp. When the first shots of the nearby battle had begun, we knew the Americans were out of their camp and indisposed elsewhere.

We stormed into the camp to find it almost completely empty. The women left behind were shocked by our arrival, we swarmed in and found our way to the tree, but the box was not to be found! According to the women left behind, a man by the name of Russell had been there just moments before and nabbed the box from the tree. I ordered the men to spread out and look for the box to no avail, it was nowhere to be found. 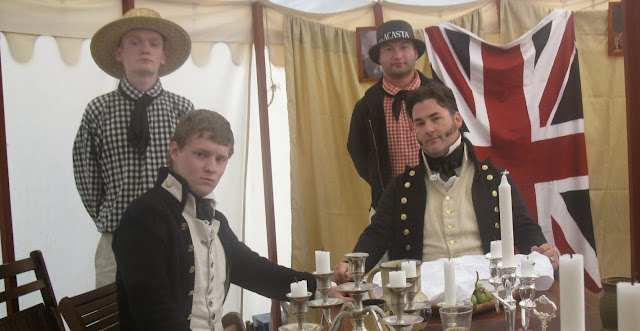 I ordered a hasty retreat from the camp and the hired men followed us back toward the British camp as the sounds of the nearby battle hung in the air. Our mission seemed to be a failure. To make matters worse, halfway back to camp Vassermann and I found ourselves surrounded and at the point of the pirates' swords. They robbed me of the remainder of the money I had been issued and left us there on the road.

I was quite crest fallen to be sure. Some time later, we learned of the box being returned to the Americans by the mysterious Mr. Russell.

A particularly fleet footed young rifleman from the 95th managed to sneak into the American camp while the bulk of them were away at a large ball held under a tent nearby, and snatch the box. According to the story I heard later the next day, he was allowed to sleep on the floor of the large mess tent in the British camp, having taken a piece of rope and tied the box to himself for safe keeping. He slept with it tied to him all night long!

We delivered up the key the next morning, opened the box and I ordered Mr. Raley to place the plans in the fire and make certain they were completely consumed.

Know sir that our mission here is complete, we are all well and on our way back toward to coast to rejoin the Acasta. I trust that you will see to it that copies of this letter will find their way into the proper hands at the Admiralty and the other interested parties at Whitehall.

I am, &c. &c.
The Doctor,
A. Roberts
Ship's Surgeon
HMS Acasta
on special assignment.