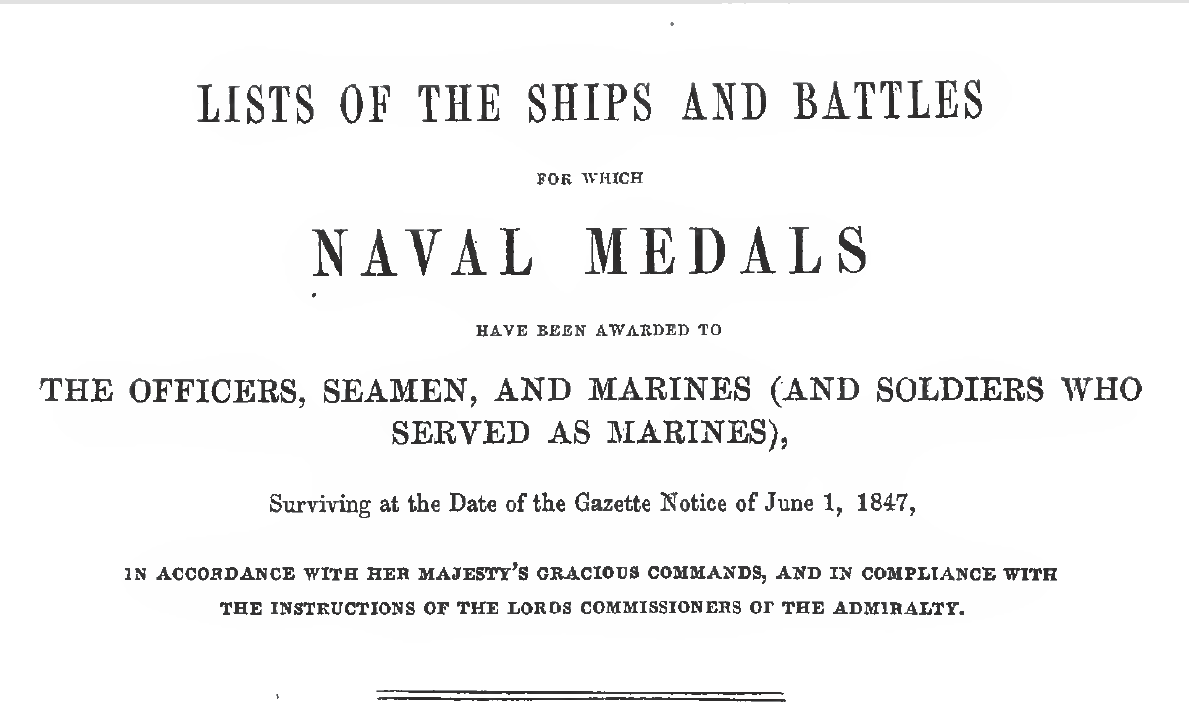 The Naval Medals prepared according to Her Majesty's gracious commands being now ready for distribution, Claimants, whether Officers or Seamen, and Marines, and Soldiers serving as Marines, and others, who served in any of the Ships hereafter named, and in the Actions specified, may give their names to the Staff Officers of Pensioners in the different Districts of the United Kingdom in which they reside, who will forward to the Admiralty lists of such Applicants on the 1st and 15th of every month (Sundays excepted), when their respective Medals will be remitted to the Staff Ofiicers for distribution. Officers may apply at the Admiralty, Whitehall, for their Medals, either personally, or by any known Navy Agent, or Banker, on and after the 15th February, between the hours of 12 and 3 o'clock.

It will be required of all applicants to make it clear to the Issuing Officer that they do not personate deceased Seamen, Marines, &c.

N.B.—The Medals awarded under the Gazette Notice of 1st June, 1847, and for which the claims were preferred in the same year, will be first issued.
By Command of their Lordships,
W. A. B. HAMILTON.

We deliver the following Lists specifying the Ships and the Battles for which, according to Her Majesty's gracious commands, and in compliance with the instructions of the Lords Commissioners of the Admiralty, Medals have been awarded to the sui-viving Officers, Seameni, and Marines (and Soldiers who served as Marines) who were present in any successful action which at tlie time received the marked approbation of the Admiralty, as shown by the official records of the promotion granted ia compliment to each occasion.
(Signed)
T. BYAM MARTIN, Admiral
T. BLADEN CAPEL, Admiral.
JAMES A. GORDON, Rear-Admiral.