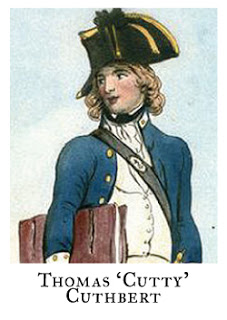 While aboard HMS Zealous, that first year I met Midshipman Thomas Cuthbert... the gunroom all called him 'Cutty'.

Cutty was a most amiable fellow, well read and quite proficient as an officer. He could laugh at nigh anything. There was nothing that he could not gamble on, he must have lost three years wages over the course of our service together. And a stout lover of mirth and good liquor.

He was every bit the spitting image of Thomas Rowlandson's vision of a midshipman circa 1799, he even had the long golden locks.

I RECALL once while in a foreign port, just after Cutty had passed his lieutenant's exam, we were both quite in our cups in way of celebration. Cutty and I sang the night away playing cards and gambling in a nearby tavern. I won four if HIS pounds that night...

Cutty became so intoxicated that I had to carry him on my back to return us both to the ship. On the way, I lost my footing and staggered and we tumbled into the gutter. We both had bits of filth in our hair and on our faces, and I completely ruined the sleeve on my nice blue jacket.

The splash in the face was just what Cutty needed, and he woke up laughing. I implored him to rise, and together, we made our way back to the ship.

We eventually made it back to the ship stinking of alcohol and the gutter. The Captain stopped us, claiming he could smell us from shore. Says he, "You gentlemen may not board until you've had a bath to wash off the stink."

Cutty, who was always very obliging, immediately stripped naked and dove into the water there by the ship. What could I do but join him? And do you know, Captain Hood even had the bosun throw down a bit of soap to aid in the process.

Email ThisBlogThis!Share to TwitterShare to FacebookShare to Pinterest
Labels: Miscellany, The Doctor