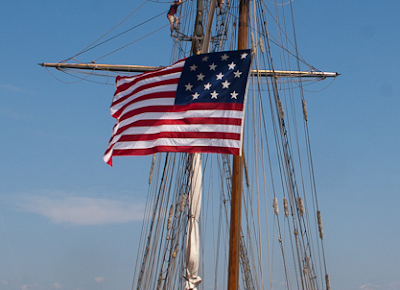 On 17th Sept. (1812), The Acasta assisted by Spartan, Statira, Nymphe, Orpheus, Maidstone, Aeolus and Emulous captured the Melantho, a ship of 402 tons attempting to make her way into Baltimore from Chile. She was laden with 229 tons of copper, 9 bales of furs and heard one of the Melantho's sailors mention that it was all worth $43,000 in American currency, but have no idea what that translates into in British coin.  This might have made for some excellent prize money had it not been for the fact that we shared the capture with so many other of His Majesty's vessels. The Melantho's Master was a fellow by the name of William Davidson, who seemed none too pleased about his ship being taken by our force.

If I recall my Homer correctly, Melantho was also the sharp tongued sister to Melanthios, and a particularly unpleasant servant to Odysseus.

Source: "AMERICAN VESSELS CAPTURED BY THE BRITISH DURING THE Revolution and War of 1812 The Records of the Vice-Admiralty Court at Halifax, Nova Scotia."