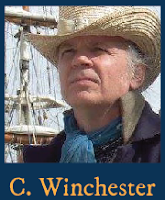 This is the first in what I hope to be an ongoing series of articles about sailor clothing during the Revolutionary and Napoleonic Wars.  In this article I will talk about shirts of the period and some of the finer nuances that can make or break an otherwise fine impression.

The shirts during this period were overwhelmingly made of linen, cut in a series of rectangles and squares. While the use of cotton was rapidly becoming more common and affordable (thanks to the invention of the cotton gin), linen would reign supreme as the preferred shirt fabric well into the nineteenth century. Wool and linsey-woolsey were alsocommonly used as a cold weather substitute for (or in addition to) a linen shirt.

Commonly, dress shirts were made of white linen. More expensive shirts, i.e. those worn by officers, would commonly have a ruffle at the neck slit, wrist or even at the wrist slit. These ruffles were normally made of finer linen such as lawn or cambric and were often quite sheer on the most expensive shirts.

Most working class men of the period owned several white shirts as well as courser works shirts.  Work shirts were made of unbleached linen in varying degrees of whitenessor checked and striped in various colours, but blue and white (with the white often predominating) were the most popular colours for checked and striped shirts.  There is at least one runaway advertisement of a man wearing an unbleached shirt with white cuffs and collar.  I suspect this was fairly common as the same arrangement is seen frequently in the mid-nineteenth century. The reasoning behind this is apparently the fact that white collar and cuffs would peak out while wearing a jacket or coat and make the wearer look a bit more respectable.  The bleaching process used at the time was somewhat expensive and therefore white linen fabric would drive up the cost of the shirt. 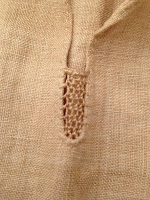 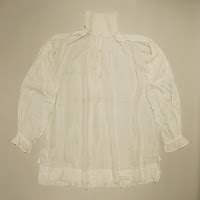 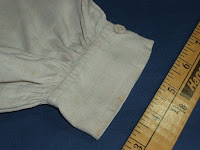 There are several detail elements that I would like to mention that separate a mediocre reproduction shirt from a really fine one. At the outset of the period under discussion, the shirt was undergoing several minor but important changes.  This was a time of rapid social change and this change was reflected in every element of society.  Clothing was noexception. Shirts in the previous era had a very narrow cuff, finished at one inch or less.  As men’s coat sleeves began to creep down the wrist and even partially covering the handduring the 1790’s, men shirts followed suit, as it was fashionable to have the shirt cuff peak out below the coat sleeve.  Where the shirts previously had a one inch wide cuff or less, now cuffs were widened to 2 ¼. 2 ½ or as much as 2 ¾ ‘s in width. One very important feature that is often overlooked in reproduction shirts is the buttonhole and button placement at the cuff.  Modern shirts center these on the cuff, i.e. placed half way between the cuff edge and shirtsleeve edge.  Period shirts had the button and buttonhole as close to the shirtsleeve edge as possible, as close as ¼ inch typically.  On work shirts these long cuffs were typically folded back while doing manual labor to get them out of the way.  It is important to note that while dress shirts and some work shirts had cuffs thatwere much wider than in the previous era, there is pictorial evidence that work shirts continued the earlier fashion of narrow cuffs right up through the end of the period under discussion. . These minute details can go a long way to improving an impression and can even serve as an interpretive tool.

Another small but important feature of the shirt is the button. Buttons were made of various materials, the most common being fabric. Dorset and thread buttons were apparently the two most common button types in this period.  The dorset button is made from thread worked around a ring core.  This core was typically made of brass wire or a stamped ring, though horn, wood and bone were also used.  Thread buttons were made in a similar fashion but worked around a thread ring as the core.  These buttons could be made at home as a cottage industry but were also being mass-produced. The threads used in both dorset and thread buttons could be of varying colours to make them more showy and decorative. Five and four hole bone buttons were coming into use during this period but I have found no definitive information as to the exact date or how rapidly they overtook the earlier styles. Dating these newcomers is complicated by the fact that often old shirts were dredged out of storage and reworked and updated by adding new elements, such as buttons.

Metal sleeve buttons were also common on men’s shirts (as well as lady’s shifts) during the late eighteenth and early nineteenth centuries. These were two buttons of brass, pewter, silver or gold plate connected by a loop of wire or stamped metal, much like a modern cuff link. It is important to note here that the proper period term is sleeve button, the term cuff link comes into use post our period. Sleeve buttons could also be made frombone or horn set with a metal shank for the eye attached in the center.  Officers dress shirts could sport sleeve buttons set with paste, rhinestones, or semi-precious jewels.

The period shirt was a slip over affair.  Shirts that buttoned from neck to hem didn’t comeabout in western culture until the last years of the nineteenth century.  Typically our shirt had a front split that could be anywhere from 6 ½ to as much as 14 inches in depth. This split was a simple cut with a folded or rolled hem. The bottom of the slit was often reinforced with a bit of bias cut fabric shaped as a square, rectangle, triangle or heart.  If this piece is omitted there is commonly a reinforcement of one or more bars worked across the bottom in a buttonhole stitch called faggoting. This is sometime elaborated further into a crossbar of netting like embroidery closing the opening. As waistcoats and coats were beginning to be worn open at the neck and upper chest during this transitional period, some shirts were beginning to use buttons at the slit to prevent the naked chest from showing. The earliest evidence I have seen for this is from a painting dated 1801 by Rembrandt Peale, showing a shirt with three buttons at the bosom. I feel that one or no buttons was more common based on existing shirts, though pinning down an exact date for this transition seems all but impossible. It’s better to ere on the side of caution and “better too early than too late”, as they say. Another form of neck slit closure used in the eighteenth century was the shirt pin, a simple brooch of silver, or gold that closed finer shirts part of the way down the slit. I have no evidence that they were still in use as late as our time period but I suspect older men who were accustomed to wearing them would carry on the tradition.

While shirt collars in the earlier period could be cut short or cut taller and folded over the cravat, dress shirts of the period under examination were typically taller to keep up with the taller neck cloths coming into fashion.  Rather than folded over they were starched and left to stand tall up under the chin and nearly touching the ear lobe.  Apparently workshirt collars lagged somewhat behind the fashionable cut but by the early nineteenth century even they grew taller and taller. As labourers (and thus sailors) often wore their shirt open at the neck with the neck cloth or kerchief tied either loose over the shirt but under the collar or loose around the neck, touching the skin, the tall shirt collar was left tosplay out onto the shoulders.  By the late 1820’s the shirt collar grew on sailors shirts to lay out over the shoulders onto the upper arm and down the back as a cape to create the “sailor shirt” or jumper, often embroidered, familiar up through the twentieth century.  This of course has no place during our period but is mentioned here to show how this style evolved as a recognizable sailor fashion.

There is another element that should be noted here that relates directly to shirts.  Soldiers in the British army were required to change their shirts every 2-3 days and I suspect the same was true in the Navy. Cleanliness is directly related to health, particularly in the military and on board ship where men are quartered close together.  This was understood during the period and much is written concerning military cleanliness, hygiene and disease. Shirts were washed (and tortured) frequently with harsh soaps, beating and scrubbing.  An unbleached linen work shirt will quickly fade to an almost, but not quite, white with continued washing in this manner, not to mention bleaching in the sun, as the working man is often without his coat and waistcoat while working. Linen is far superior to just about any other material for shirts as it can stand the demands of hard use and frequent washing in this manner. The shirt is cut loose to allow air to circulate within the many folds and creases. Linen has the added comfort of being cool against the skin in hotweather and warm in cold.  It also does an admirable job of wicking up perspiration and passing it along to the outer garments.  This evaporation process helps to keep the wearer somewhat cooler than other fabrics, acting as a natural air conditioning. Only wool does abetter job but wool can’t match the comfort or durability of linen.

Gehret, Ellen J., Rural Pennsylvania Clothing. York, Pennsylvania: Geo. Shumway Publications, 1976.  While this book is chock full of wonderful information and photographs of original garments dealing with the period immediately after the American Revolutionary War, it deals with a select group of people (the Pennsylvania Germans) and their culture.  Much of the information, while specific to this region and people is also generic to clothing in America and England at the time.  It would be prudent to use other sources by way of contrast and comparison to understand the cultural differences of the garments presented here.

Baumgarten, Linda, What Clothes Reveal, The Language of Clothing in Colonial and Federal America. Williamsburg, Virginia: Colonial Williamsburg Foundation, 2002. If not the bible for men’s and women’s clothing during this period, then it’s the next best thing.  Examines clothing in the social and cultural context in America at this time. Muchof the material is true to Western culture in general as a truly American culture was still in its infancy. There is a wealth of information on shirts in this book.

Fortunately there are hundreds of satirical cartoons showing sailors at work and play during our time period.  While not all show sailors in their shirt sleeves a few do and many others show the neck and sleeve cuff of the shirt.  They are also invaluable in showing how the shirt and clothing in general was worn in daily practice.