Niagara on the Lake part 1


I arrived at Navy Hall earlier than ordered and it afforded me the opportunity to meet some of the Navy gentlemen that I had, up until this time, only corresponded with. The newly promoted Commander Schifferdecker and the crew of the Nancy had a lovely set up there by the Hall. A fine table set under a lovely canvas tent and on the Commander's new checkered floor cloth no less. 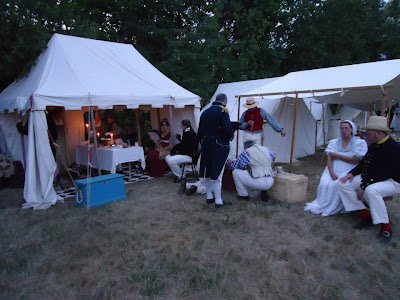 Commander Schifferdecker pulled me aside and told me that he had received correspondence stating that Capt. Freymann had been unavoidably detained and would be unable to join the squadron.

We were transported to the ships on Friday afternoon, and taken to the docks were they lay in wait for our arrival.

After being informed that our ships were not yet ready for us, I watched the crew of the Pathfinder up in the rigging as she lay in dock from the shade of an obliging tree. I was so tired from my long journey that I lay on the ground there with my hat over my face and fell fast asleep. I didn't awaken until Capt. Allie and Mr Cussick returned from scouting the nearby ale houses.

By this time we were able to stow dunage aboard the ships as they lay in the harbor across Lake Ontario from our intended point of assault.

Took our supper in a little place along the shore next to the Dock Shoppe and Ship's Chandler.

Ate with Commander Schifferdecker who sat at the head of the table, flanked by Capt. Allie of the 95th Rifles, whom I had met whilst tracking the American Spy in Mississinewa. At the table were also the elder Mr. Swanson and his son Midshipman Swanson and Mr. Cusick.

We were all so thirsty from the heat of the day and our work that nearly every one of us drank down three large glasses before our food arrived.

Our table was situated comfortably next to a great window that looked out into the busy street where I could indulge in my favourite pass-time of watching people as they passed. My meal consisted of an excellent vegetable pie which I was unable to completely finish.

Afterword, I played Whist with some of the gentlemen and followed it with some dice games in an attempt to relax before the coming assault. Mr. Cusick and Capt. Allie tried to tempt me into another game of whist, but I was far too tired for it. I eventually retired to my cot and did a little writing before finally turning in.

Email ThisBlogThis!Share to TwitterShare to FacebookShare to Pinterest
Labels: Mission 3, The Doctor