How to be a 'Dirty Sailor' 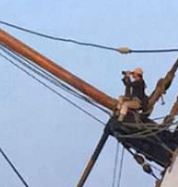 The following thoughts are reflections on my use of 1780s clothing aboard the recreated frigate Hermione during its maiden voyage to America in 2015, and the effect it had on the period wardrobe I used throughout. While the ship itself combined historical function with modern features (for instance, linen sails and modern toilets), my French maritime clothing was made entirely in a c. 1780 period manner, from documented materials and based on over a year of research (which is currently ongoing).

While I will never pretend that my experience was in any way entirely analogous to that of someone 236 years ago, at the same time I had the unique opportunity to use my recreated material culture in its proper environment (eg. furling sails aloft in hand-made 1776-documented reproduction footwear), and to do so for an extended period (essentially 7 months, 24/7). While I would highly encourage anyone to do the same volunteering or working aboard a Tall Ship or maritime history site, for those obliged to remain on land, substitutes can be found to make one’s clothing more representative of historical life at sea.

Therefore, I’d offer the following thoughts to those who recreate the world of mariners in the Age of Sail or anyone interested in the finer points of costuming working clothing from the 18th century. 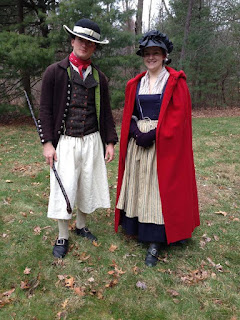 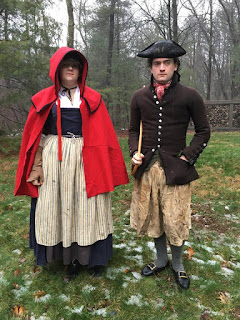 
1) Any garments used for daily tasks aboard ship will become heavily stained, but only in particular areas.

Some tasks, like painting, tarring or caulking, are more obviously dirty than others, but simpler tasks too, such as daily cleaning or even eating can similarly mar one’s clothing. Workwear like aprons, sailor’s trousers/petticoat breeches can help limit this, or simple adjustments like rolling up one’s sleeves or wearing a cap to cover one’s hair. But again, stains can come from unexpected sources; for example, hauling on recently-tarred lines which ‘sweat’ when under strain, or sitting down on fresh paint at night. 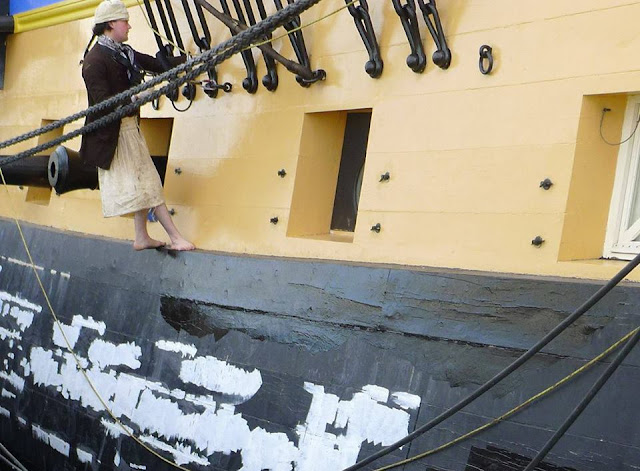 If you have to recreate this theatrically, think of where you wipe your hands when they’re filthy (I do across my thighs), where the stains themselves appear (for instance, on the knees from kneeling when caulking, or on the cuffs where the shirt is exposed), or in what manner (for instance, a paint-brush may flick liquid onto clothing, whiles lines aloft drip down onto deck). 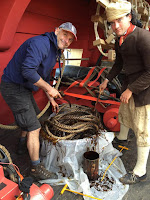 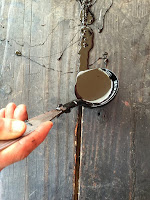 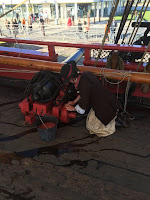 2) Period stains and smells are often the first thing people notice in interacting with you.

Visitor’s most immediate reaction when coming aboard was to the various mixes of tar coating the standing rigging and woodwork. In talking to me, people often began also with a similar comment noting both this and the sweet acrid smell of tobacco smoke impregnating my clothing and hair, even when I wasn’t actively smoking. These subtle details are where authenticity really shines and where anachronisms are most glaring (for instance, modern cigarettes have an entirely different odor). And other scents, whether related to food, grooming, cleaning, or fighting (eg. sweat, black powder, modern shampoo) equally apply. When giving programs on the dock in my work clothing, I knew I had to balance my unkempt appearance, (meaning visitors even thought I was a homeless man smoking crack, a unbathed Smurf, or alternately a visitor from a rural Balkan village), but the sense of smell was also one of the strongest ‘hooks’ I had in engaging any visitor for further conversation.

3) Clothing made of natural materials wear out and need constant maintenance. 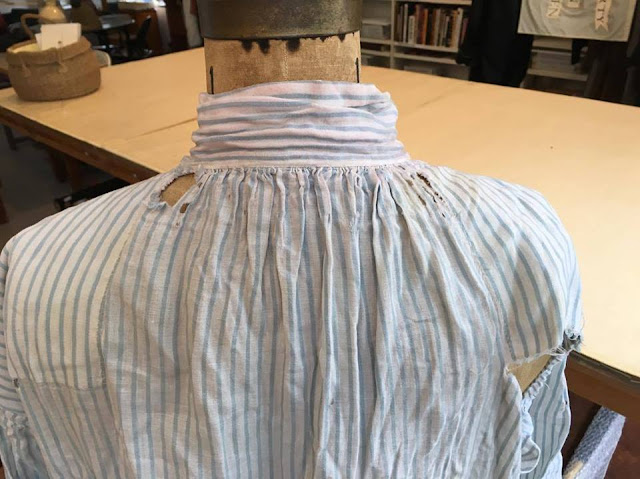 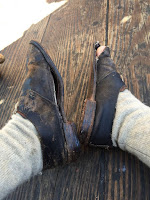 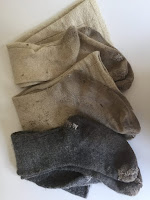 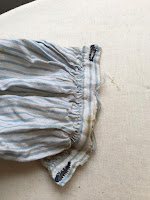 For instance, while the heavily fulled woolen cloth of a ‘bearskin’ overcoat may be incredibly durable, the linen stitches binding its panels together will rot more quickly when exposed to water, sunlight, and the strains of use. Similarly, since shirts are the most heavily used and laundered garments, they require constant oversight to make sure that stress points haven’t appeared or seams come undone. The toes and feet of stockings similarly require daily repair, and darning them actually became a great public demo to speak about daily life once our ship began touring up the East Coast. Similarly, shoes were incredibly worn by both work on deck (like washing every morning), and climbing aloft (where ratlines popped stitching, and chafed the uppers). Garments also generally faded in color over time when exposed to weather and sunlight, something which only struck me when I saw before-and-after comparison pictures of one of my jackets. While rips and patches are a standard trope of costuming which I would caution anyone against adding artificially (think ‘distressed jeans’), perhaps instead, consider using one’s historical clothing in any other genre of physical work, such as yardwork, or hiking. There is no substitute for the understanding and experience of ‘wearing in’ one’s clothing, but a compromise can clearly be struck.

4) Keeping a shore-going ‘clean’ outfit is immensely rewarding, as is daily variation in accessories. 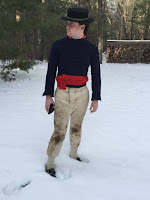 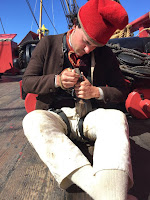 After weeks at sea spent working in the same general outfit, there was nothing quite like digging into the bottom of my calf-skin sea-bag, and retrieving my set of off-duty clothing for days and nights where I had time off. Being able to add variety and personal flair on these occasions was astonishingly fun; buckles and hat-bands to headwear, queue rosettes to dressed hair, nicer sleeve-buttons to white linens, un-faded handkerchiefs and waistcoats, plus the ever-present sailor’s stick all became genuine treats that brought a surge of confidence to my nights out with friends in new cities. Obviously this level of detail requires a ‘critical mass’ in building up one’s stock of reproduction material culture, as well-as a strongly-defined interpretive context, but I found this type of social detail to be absolutely fascinating, and one of the richest rewards of my entire time aboard l’Hermione. 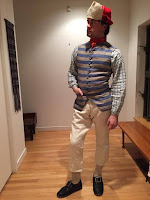 A special thanks from the members of the Acasta to Adam for sharing this article with us and for letting us participate in his amazing experience just a little bit when we went to visit aboard l'Hermione!
Enter'd into the log by HMSAcasta.com