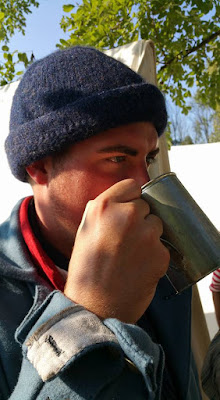 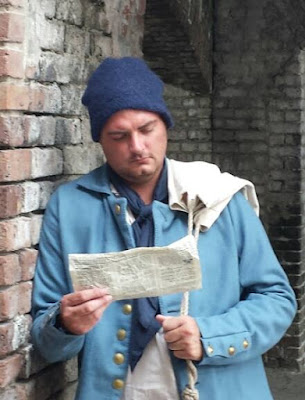 Will Miller come about being a tar in a peculiar manner. Most of your Man o War's men are either pressed or grew up on the water- fishermen, smugglers and such. Miller had been an artillery soldier before and got his discharge during the peace.  When things heated up again he volunteered for the  Navy and I reckon they was glad to have him for his artillery experience and all. He was a quiet fellow who kept his own counsel, but he was eager to learn the skills a good tar knows, and he took to it well.

As you may know among tars to call a fellow a "soger" or to say something was done "soger fashion" is about as insulting as one tar can get to another. Well, when some of 'em found out Miller really had been a soldier they just would not let it rest. One in particular, a beef witted fellow named Campbell- would follow up anything Miller done with something like "this here splice is done soger fashion, best get a tar to do it right" and such. Miller never seemed to take notice of it.

Which one day in Bermuda port they had give us a make and mend day. Miller had set to the job of learning knots and such and had given hiself the task of splicing a number of bale slings and had just begun and finished a whipping on a length of line. He was setting with Joshua Wilson when Campbell come and bent over the two of 'em and says "it's a waste a time to try and teach a SOGER knotwork Josh".

Quick as a cat Miller swung a leg and knocked both of Campbell's out from under him , dropping him flat on the deck and leaving him muddled and gasping like a mackerel. Miller took one of Campbell's legs  in hand and bound it quite handsomely before pulling it taught, cleated it tight round a pin and shoved Campbell over the side. Leftenant Tumbush, who was officer of the watch, all of a sudden found something which interested him ashore. He knew how much grief Miller had been catching I suppose.

All of us nearby was just staring with open mouths and Miller points at Campbells foot with the knot around his ankle- it was all ya could see of him over the side- and says to Wilson-  "Rolling hitch, for when the pull is at an angle". "That's right" says Wilson as he and another fellow heave Campbell back to the deck before Tumbush decides to notice.

That was the end of that "Soger" claptrap.

-James Cullen,
Remembrances of Eight years before the Mast,
1834.