Boarding Party Tactics in the Age of Fighting Sail 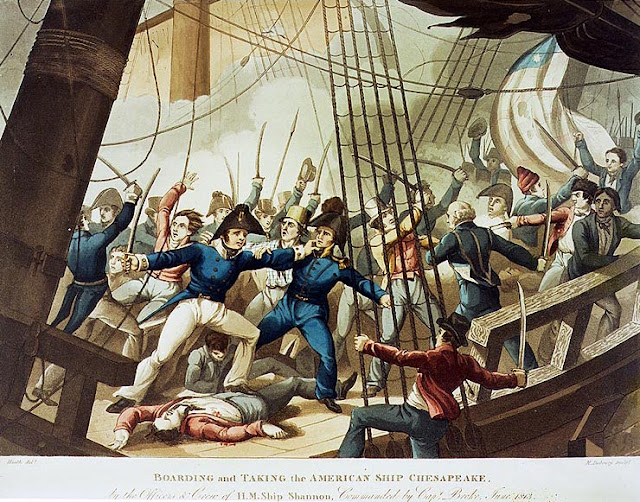 In the 'Age of Fighting Sail', and specially the period of 1793-1815, it often took the actual boarding of an enemy naval vessel, to secure surrender, especially in a single-ship-to-ship action, upon the high seas. After the cannon broadsides pummeled opposing ships, often causing severe damage to the sails and rigging, and reducing a ships steering ability, then pulling along-side and resorting to 'cold steel' was, often-times, the last resort.

In the British Royal Navy, boarding a French or Spanish (and later American) enemy vessel, was a favored way to finish off task of 'securing a prize'. If say a RN frigate was attempting to take an enemy ship, of like size, it would be worked along-side of the opposing vessel, close enough that the cannons would be neutralized. Often then, musketry would be employed by British marines (in the fighting tops and also on-deck) to eliminate enemy officers, to cause confusion in command. The tossing of 'iron bombs' (larger fused grenades) onto decks and into open hatches, would cause serious damage, as well. This was a prelude to skilled sailors employing the tossing of iron grappling hooks and lines, over the gunnels, to pull each vessel together..though the enemy sailors would often use axes, to cut the rope lines, to avoid this method of securing. When the ships were touching, and the moment was right..a cry of 'boarders away' would be yelled, and a boarding party of armed sailors and British marines, often led by a junior lieutenant or warrant officer, would scramble over to the enemy vessel, to help secure a surrender.

All assortment of weapons would be used, kept handy on-deck in wooden tubs..loaded Sea-service pistols, cutlasses, boarding axes and short boarding pikes, even muskets with bayonets would be carried. At that point, it was a harsh melee of hand-to-hand deck fighting, and the tactics were to disable an opponent from further opposition. Any severe arm or leg injury would usually do that, and a broken limb was just as good as a cut-or-thrust. Heavy cutlass hilts were often used to gouge eyes or mouths, and the blades used to break shoulder bones. Pistols were often loaded with bird-shot to take down a number of enemy, in close-quarters. The goal was to cut down resistance, and compel a surrender by the enemy ship's captain or surviving senior officer, where the fighting would thus end, with the striking of the 'ship's colours.

Once the ship succumbed (via surrender), then it would be determined whether the enemy vessel was worthy of salvage (still sea-worthy), and if so, a 'prize party' would secure it for sailing back to a British harbor, for liquidation (or refitting and re-commissioning). If the enemy ship was deemed to be 'lost' (would not survive a journey, and thus was 'sinking'), then special gangs of skilled sailors would be employed to gather any useful cargo, arms, food stores, valuables, and more importantly, ships logs, charts, dispatches, etc, that might be used for intelligence, back to RN vessel, and the arduous task of gathering the prisoners (and wounded) on-board, as well. As in most land battles, of that time the fighting was alway heaviest, at the end...just before surrender.

'The Encyclopedia of the War of 1812' A Political, Social and Military History' on-line