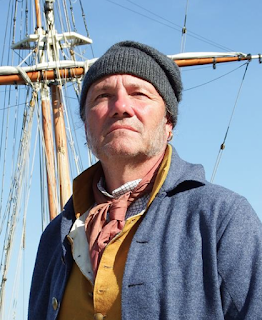 Strange Fortune- the Life and Times of Jean Baptiste Girard

A story in four parts by Tony Gerard.

"Here she comes yonder, Billy!" From the amount of appreciation in the topman's voice this could have referred to a barmaid coming with the first round after a long commission. As it was it  referred to a long line of grey clouds. The rain came swiftly, driving the wind before it. Third Lieutenant Tumbusch, officer of the watch, smiled broadly at the sailing master MacLachlan, who smiled just as broadly back. It was MacLachlan who caught himself first and assumed a countenance more suitable to a gentleman of his standing. Tumbusch quickly followed suit. The Acasta, becalmed for three days, leapt to life like a bird uncaged.

Deep below in the cockpit no one was prepared for the sudden movement. The Surgeon, Dr. Roberts, braced himself by grabbing an overhead beam as medical instruments slid off the makeshift table. Baptiste, the Surgeon's mate, did the same.

The injured young sailor swung forward in the hammock, then back, smacking solidly into the mate.

"It appears we are underway again" said Roberts.

"Oui, is good." agreed Baptiste as he sidestepped a second swing of the hammock. The young sailor  continued with gritted teeth. He was lucky to be alive. Two hours before he had taken a fall from the tops, struck a yard on his way down breaking both legs, missed an open gunport by inches and landed in the Atlantic.

A shipmate, one of the few who could swim, dove after him immediately.

The right leg break was a particularly bad one. When he was carried below the bone shone clean and white a hand's breath out of the thigh. The surgeon had felt carefully, but painfully, for additional breaks. A fracture would mean amputation. Unlike many of the Royal Navy surgeons Roberts was never one to casually deprive a man of a limb.

They had pushed the bone back into place and set the leg. Roberts was still worried. The tissue had swollen quickly and he could have missed an additional break. The sailor had begged pitifully not to amputate and the doctor was thinking perhaps his pity had outweighed his medical judgment.

"Little point in second guessing one's own judgment" he said half aloud to himself as he picked up the spilled instruments. The ship had now settled into a comfortable, gentle rock. From far above a slight breath of fresh air even made its way into the dank cockpit.

The sailor groaned loudly and Baptiste looked inquiringly at Roberts. He wanted to give the man more laudanum.

The doctor was stingy with the laudanum. The sailor had been dosed before setting his legs. It wasn't that Roberts was indifferent to the man's suffering; if they ran low or, God forbid, ran out there was no way to be resupplied. Today it was only a bad break, tomorrow it could be forty horribly wounded after a bloody engagement. Or nothing for months. With no way to predict it was best to err on the side of caution.

Baptiste continued to look at the surgeon. They had worked together long enough now that words were often unnecessary. Roberts eventually nodded his consent.

As he filled the dosing quill the mate turned his back to Roberts. He gave the man a bit extra. Events in his life had rarely rewarded long tern planning.

The sailor knew the laudanum for what it was and drained the quill eagerly. Baptiste started to remove the man's neck rag to wipe the sweat from his face, but found it already soaked through. The sailor's face was still a mask of pain and exhaustion.

The mate removed his own neck cloth and wiped the man's brow. As he leaned forward a gold pendant on a thong around his neck swung free, almost in the sailor's face.

The pendant was a curious shape, an open circle, thicker at the bottom than top. Where it almost joined at the bottom either end turned inward to form short horns projecting toward the center.

"Wot's at- some sort o' Paptist thing?" The mate looked confused, the sailor pointed weakly with his chin. 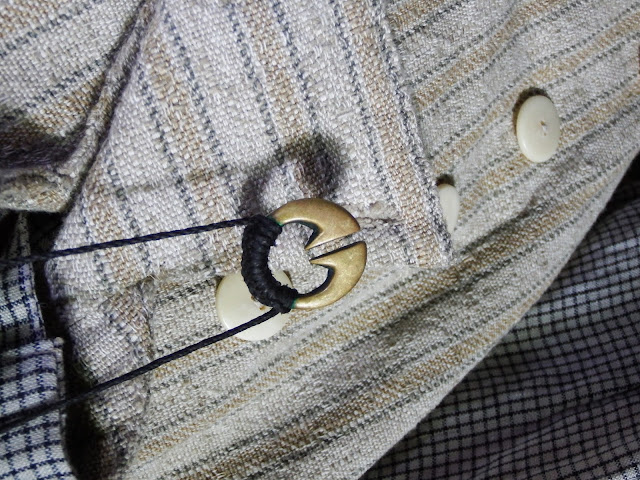 "Is long to tell". The mate looked to the surgeon. There was little else that required immediate attention. Roberts nodded his consent. The mate sat down on the end of one of the chests that made the table.

"Thought it were the Philippines"

Roberts smiled knowingly. The mate's stories rarely traveled in a straight line, but they were a good distraction from the tedium of the blockade. He seated himself in an empty hammock.