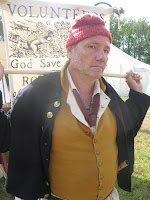 “There is aboard my ship an old French sailor. He has been impressed as the surgeon’s mate, we having lost ours, and he having served in that capacity aboard others. He is a cheerful enough fellow for having been forced into the position of possibly fighting his countrymen and is full of stories from his travels. He has twice been wrecked, chased by land crocodiles in the Dutch West Indies, captured by Spanish privateers, stowed a rattlesnake aboard his ship, lived among head hunters in the South China Sea and a thousand other such tales. If a quarter of what he tells is truth he has lived a full life indeed!”