At the recent Jane Austen festival, our new captain made his first surprise appearance and brought promotions with him! You can see him promote two of our own in the above video… you may need to turn up your volume in order to best hear it.

In addition, there have been several other promotions earned, and they are as follows:

Two of our young gentlemen took the Volunteer First Class test and passed with flying colors! They are as follows:

Plus we have gained two new very promising recruits: 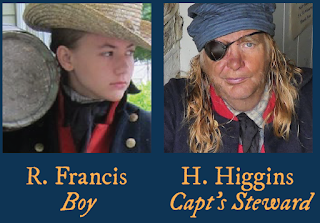 And last, but certainly not least, we have gained another Rooster! Introducing BLUE PETER, the son of Lord Nelson!