A Letter to the Admiralty

Copy of a Letter from Captain R. Freymann, commanding HMS Acasta, concerning the outcome of a recent mission to New Boston, addressed to the Admiralty. 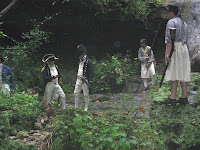 I have the honor to report to you for the Information of Their Lordships that this day that a Landing Party from His Majesty's Ship Acasta was able to retrieve, and destroy, a Package from the Secretary of State's Office, which had been smuggled into North America by enemies of the Crown. On the third of September, owing to a shortage of potable Water and being reluctant to return to Halifax to replenish our Stock, the Decision was made to send a small Landing Party ashore to procure Water from a suitable Stream located near the Village of New Boston. Local Fishermen, many of whom are opposed to the Conflict and openly trade with us, were able to provide Intelligence regarding the arrival in New Boston, of an Individual claiming to have secreted on Her Person, a Package surreptitiously obtained from His Majesty's Government and passed to Her by an unknown Accomplice. 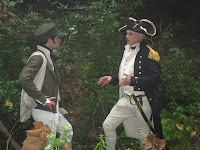 It was therefore resolved that the Acastas would attempt to recover the purloined Documents whilst ashore in so much as it would not lead to an untenable Situation in which we could not easily extricate ourselves. We were greatly aided in both of our Efforts through the Assistance of Irishman who, despite having lived amongst the Americans for some period, retained his Allegiance to His Majesty not only guided our Landing Party to the Water Source but also provided invaluable Service by closely observing the Movements of the suspected Individual. The task of supervising the filling of our Water Cask fell to Midshipman Raley, who acquitted his responsibilities with Efficiency and Alacrity. Lts. Hamilton and Ramsay, Dr. Roberts, my Clerk Mr. Cushing, and I were guided to the Village of New Boston by our Irish Compatriot. We were much surprised to find the Inhabitants, for the most part, totally unconcerned over our Presence, notably due to the unpopularity of "Mr. Madison's War" as they referred to the current state of Conflict and the willingness of local Merchants to accept His Majesty's Currency in Payment for Items purchased. 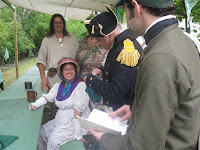 Despite several false Leads, the Documents were found secreted upon the Person of a female, neatly hidden in her Turban, who despite Protestations to not "having the slightest inkling" of how the Items came to be in her Headdress, surrendered a Package containing a blank Passport and sum of Money in both His Majesty's Currency and that of the United States. I took it upon myself to personally destroy the blank Passport, should it be retaken. The Funds, for which no clear Ownership could be established, have been sent to Your Office, where it is hoped, Sir, that the Funds will be treated as Prize Money and distributed accordingly.