An answer from the Doctor to his arrogant elder brother. 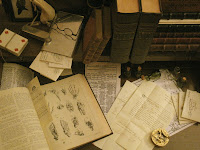 I Received the favour of your letter of the 12th. There was a time when if any one would have told me that I should ever have written to you such a letter as I am now writing, I would as soon have believed that the earth would have burst asunder, or that I would see stars falling to the ground, or trees and mountains rising to the heavens. But there is nothing too strange to happen. One thing would have appeared yet more impossible than my writing it, which is, that you should have given me the cause to have written it, and yet that has happened.

Do not presume to preach to me of virtue or reputation, brother. Those years ago when you had the opportunity to stand by my side as a brother ought, you lacked the intestinal fortitude to do so. Where were these qualities in yourself when you chose to stand with those that conspired to do me ill? And now, these years later I hear from you only so you can spout your useless platitudes and to make a request upon my pocketbook?

Your letter insults me, to think that you can play upon my sense of family, duty or pity in an attempt to manipulate me into granting your request for money. While I have it at my disposal to aid you in your request, I will not be doing so. Had it been our mother or father who had made the request, I should have been inclined to assist. As the request comes from you, I can only imagine that you have spent the allowance from our Father in the card houses and on women of ill-repute. I should sooner throw fifty guineas into the ocean then give them to you.

I had often been told of your cowardice, but refused to listen to it. I supposed your heart no more capable of deceit than my own : but I can not disbelieve the evidence confirmed by my own eyes. Sir, I take my leave of you and beg you will forget there ever was such a man as