A Cockfighting Primer part I 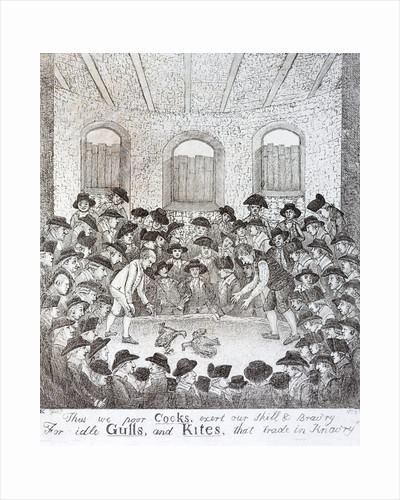 Introduction: As an American, even if you are not a sports fan, you probably know the basic rules of baseball. You can probably name several professional teams and you wouldn’t be confused by the meaning of “striking out” or” hitting a home run”. Baseball is just that much a part of our American culture.  It was much the same with Cockfighting in late 18th/early 19th century England.

It was a brutal time- slavery was legal, there were no child labor laws and blood sports -such as bear baiting, rat killing, dog and cock fighting, were socially acceptable. There were resistance movements to all these practices at the time, but most had little popular support. As Acastas we strive to present history as accurately as possible- warts and all! Cockfighting- called “cocking” by its devotees, was popular with many people at the time and sailors were no exception. This article seeks to fill a person in on the basics pretty much everyone at the time would know about cock fighting.

Fighting Cocks
Sadly, it appears that chickens were originally domesticated for fighting purposes. Meat and egg breeds came later. Just how early chickens were domesticated is debated, but it was many centuries before the 1700s. By the eighteenth century many breeds of both “meat and egg” and “game “varieties of chickens were well established. These were not true breeds as we use the term today, but rather regional varieties or preserved bloodlines that had traits and characteristics which made them identifiable to a knowledgeable individual.

European game birds of the period had a more upright carriage (they stand up straighter), were more streamlined in appearance, and in general, were more active, alert and nervous a than is typical for a barnyard chicken. Barnyard chickens were commonly referred to as “Dunghill fowl”.  The expression “to die dunghill” or “to turn dunghill” referred to one, either human or chicken, who died while retreating or ran from the battle respectively. Game birds had been bred for centuries for aggression and tenacity; to “die game” meant to bravely carry on the fight to the bitter end. 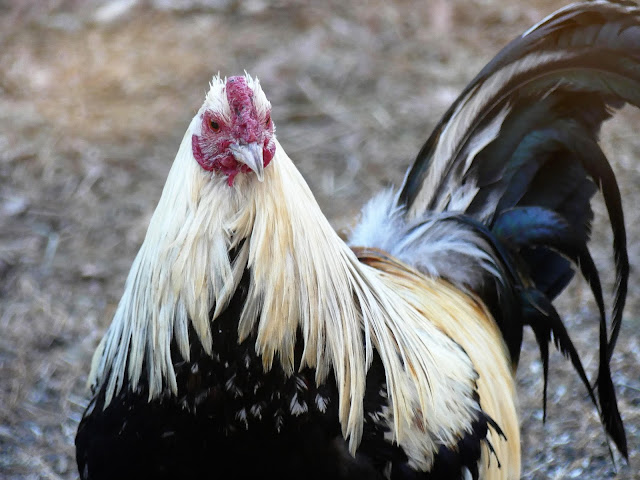 In coloration game birds came in most of the typical colors varieties we see in modern chicken breeds, although the Birchin (pale gray with darker gray bars) coloration seems uncommon at the time and the Buff (pale orange) coloration seems non-existant. Black Breasted Red was one of the most common color patterns, being red on the neck and back with a black breast and tail. This is also the coloration of the male Red Jungle Fowl, the wild ancestor of modern chickens. Historic games did not have feathers on their feet and they laid whitish color eggs. Brown egg color and feathered feet are both traits which came with Asiatic breeds brought into Europe in the mid-19th century. 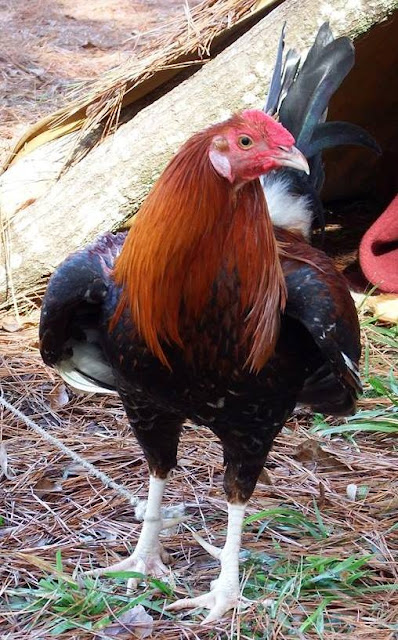 The Acasta’s “Lord Nelson” is a black breasted red

In the 18th/19th centuries individual birds were rarely celebrated as champions. Frankly most just didn’t live that long. Instead the “fandom” or patronage was generally tied to a particular line of gamebirds. Careful selective breeding insured that most birds in a particular line had a similar temperament, appearance and fighting style. Breed books of the time do occasionally mention a bird with enough notoriety to have its own name (“the Drunken Blacksmith” is my favorite) but it is a rare exception.

To be continued tomorrow in part II