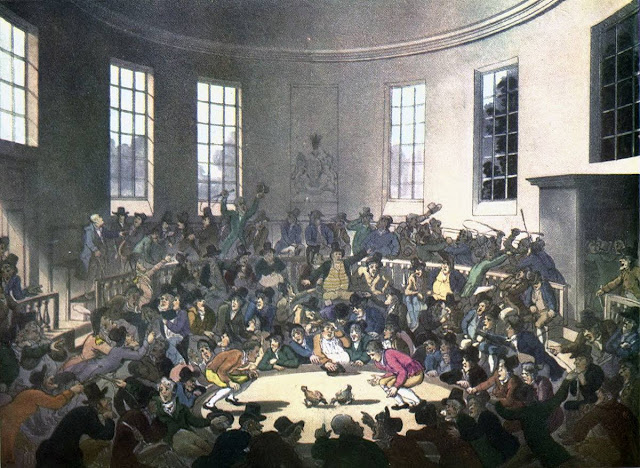 Almost every larger English town had a cockpit, often several. The most elaborate were indoor affairs with a central circular or oval pit where the birds fought surrounded by circular rows of benches at progressively higher levels. In the country cockpits were often outdoors and much less elaborate. In some case only a rope- or sometimes no boundary - marked the edge of the “pit” area.

Cockfights typically consisted of several individual fights, termed “matches” between pairs of cocks. The entire event was termed a “main” (hence the “main event”). There were usually an odd number of induvial fights scheduled during a main. If two gentlemen were pitting cocks of their respective individual lines against one another in addition to betting on individual fights it was also common to bet on the winner of the main. In a “Welsh Main” an equal number of individual bouts were set. In each case the winners of the previous round were pitted against one another until only one eventually remained. In a “Battle Royal” many cocks were pitted at the same time.

The cockpit was one of the few places or activities where upper-class and lower-class people rubbed shoulders almost indiscriminately. As would be expected betting was a major part of the sport, and alcohol consumption and rowdy behavior were rampant. In fact, many of the early local efforts to outlaw cockfighting focused not on the cruelty of the sport, but on the boisterous and profane behavior which accompanied cockfighting. 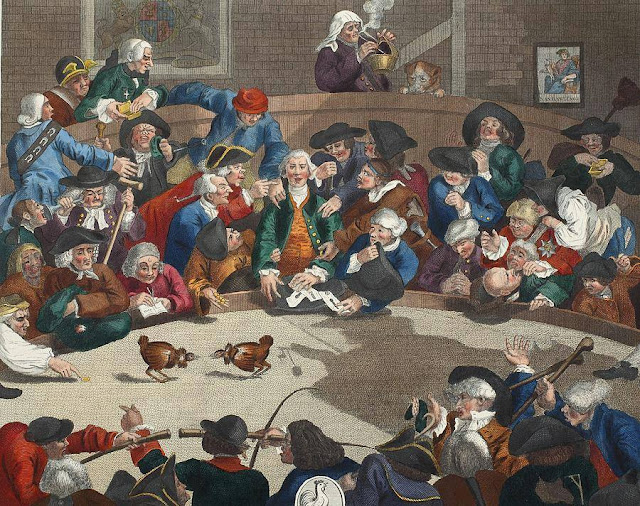 Preparing for the Fight
As already mentioned a gamecock would be dubbed at some point prior to being pitted.  Several other alterations were also typical. Normally a cock would have his tailfeathers, wings, body and neck feathers (termed hackles) trimmed, so that an opponent couldn’t get a good hold on any during the fight.  This is the genesis of the expression “in fighting trim”. When displaying aggression toward a rival a cock will frill out his neck hackles - source of the expression “don’t get your hackles up”. For what is an otherwise beautiful bird a cock “in fighting trim” with “his hackles up” looks ridiculous. 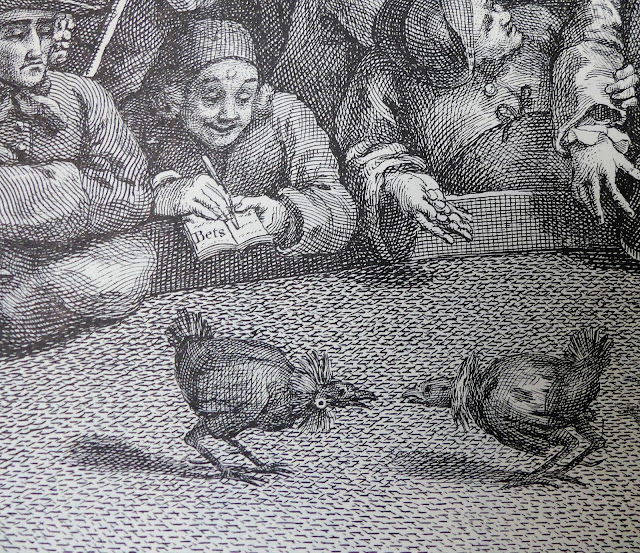 Detail from Hogarth’s “The Pit Ticket”

In addition to being trimmed a cock usually had its natural spurs cut off. Rarely cocks were fought with their natural spurs filed to an unnaturally sharp point. This was termed fighting “naked heeled” by the English. More commonly a cock was fitted with an artificial metal spur or blade which was tied in place where the natural spur had set. In French, English and American cockfighting the artificial spur -termed a gaff- was fitted with a socket which went over the stub of the natural spur. The lethal end was an upward curving, ice pick like point. These gaffs were usually iron or steel, although expensive sets were sometimes made of silver. Typically (but not always) such gaffs were put on both the cock’s legs. There was an art in knowing how to “gaff” a cock to its best advantage. To be a good gaffer was a skill much in demand. A bird equipped with his gaffs was “heeled”, the source of the expression “well heeled”. 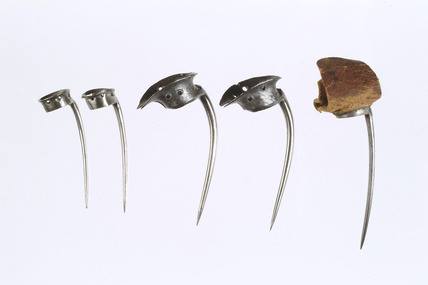 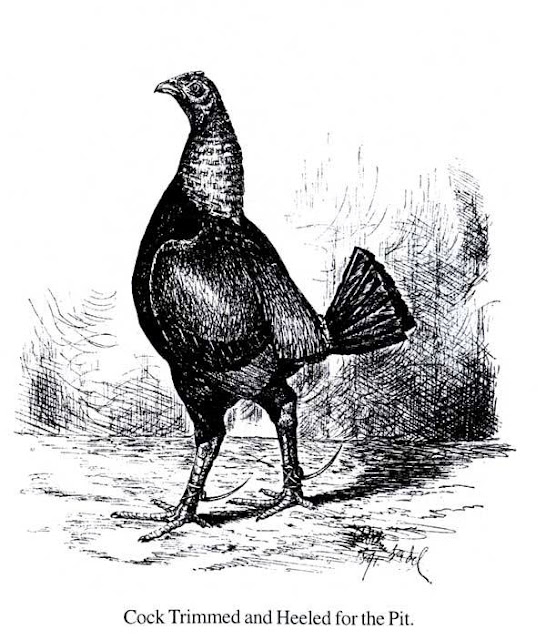 In Spanish and Asian cockfighting, the artificial weapon looks like a small scimitar blade fitted with a U shaped stirrup or sometimes a socket which fit over the natural spur’s stump. Termed “blades”, “knives” or “slashers”, they were typically (but not always) fitted to one leg only. A “blade” typically made a more quickly lethal wound than a “gaff”, so Spanish cockfights tended to be over more quickly than were Anglo European cockfights. 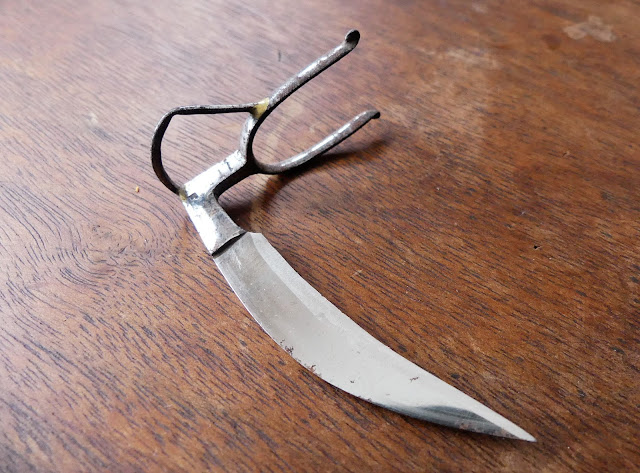 to be concluded tomorrow in part IV