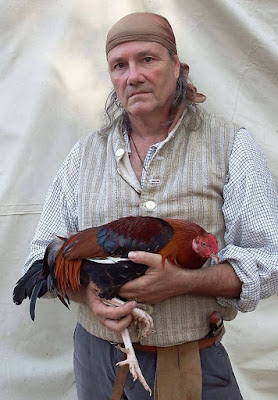 A pit “master” or “judge” served as a referee for each fight. It was his job to ensure that the rules of the pit were followed and to watch for cheating. Pit rules were often long, detailed and varied.  It is beyond the scope of this article to go into an overview of pit rules, but they covered everything from the weight of matched cocks to the type of gaffs used. Typically, any give pit would have its own set of rules. One of my personal favorite 18th century pit rules I’ve run across is that each setter much lick the gaffs of his cock before he was pitted. This was to prove the gaffs hadn’t been coated with a poison.

Each cock had an individual “setter to” or “setter”.  Being a good setter was a skill equally as important, if not more so, than a gaffer. For poor folks the setter was often the bird’s owner, for the upper class he was often a professional.  The setter initially placed his bird in the pit. Knowing the bird’s individual fighting style, he tried to place it to its best advantage. He was also the individual, along with the other setter, to separate the bids should they get “hung up” (having a gaff in its opponent such that it can’t get free), return the bird to the pit if somehow came out or potentially give the bird some quick first aide under the right circumstances.
Cockfights were almost invariably to the death of one of the individuals. The setters initially placed the birds facing each other in the center of the pit. The birds would then fight until one was killed, refused to fight or they became hung up. If they became hung up the birds were carefully separate and put back in the center if the pit. Sometimes a match was ended quickly by a killing blow to the head or vitals but often the match went on until both birds were weakened by a series of wounds. If both birds became too weak to stand they were typically set next to each other in the pit’s center. If one bird declined to peck at another the other bird was considered the winner. If both or neither pecked the winner was considered the last bird alive. After a match a bird that was considered to have “gone down game”- badly wounded but still alive- might try to be saved. The setter might suck blood from his wounds or mouth or any number of strange such remedies.  As with the diets one has to wonder how any birds, already wounded, survived some treatments. “Sweating” a cock involved putting the wounded bird in a basket near a hot stove. Other treatments seem equally detrimental.

The End of Legal Cockfighting

As the 19th century progressed cocking became viewed less and less favorably. In England it was outlawed in 1849, although it continued in secret. Writing in 1865 the Hon. Grantley Berkeley, says: —"It had, however, become so contraband an amusement, that we could only enjoy it under secret and carefully-arranged circumstances. These were always left to me, and then every one of our mains was sure to be attended by a good many members of both Houses of Parliament; also a few of the clergy."