The Royal Navy has always had problems recruiting enough personnel to crew the ships of the fleet, mostly during the times of war. Prior to the twentieth century, there were three means of recruiting: voluntary service, impressment and Quota Acts. 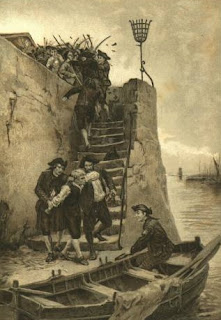 Men who volunteered to join the navy received conduct money and two month's salary in advance. From this, the sailor was expected to purchase clothes and equipment from the Purser, known as slops. This usually included the purchase of a hammock. One of the benefits of volunteering for the navy was that the sailor would be protected from any creditors if the debt owed was less than £20.

Impressment was a long standing authority from the state for the recruitment to military service, either on land or on sea. The impress service, or more commonly called the press gang, was employed to seize men for employment at sea in British seaports. Impressment was used as far back as Elizabethan times when this form of recruitment became a statute and later the Vagrancy Act 1597, men of disrepute (usually homeless vagrants) could be drafted into service. In 1703, an act limited the seizure of men for naval service to those under 18, although apprentices were exempt from being pressed. In 1740, the age was raised to 55. Officially, no foreigner could be impressed although they were able to volunteer. If, however, the foreigner married a British woman, or had worked on a British merchant ship for two years, their protection was lost and they could be impressed. However, these limits were often ignored and the impressment of Americans into the British navy became one of the causes of the American War of 1812.

Once a man had been seized by the press gang, he was offered a choice. He could either sign up as a volunteer and receive the benefits that came with being a volunteer (advance payment etc.) or he could remain a pressed man and receive nothing. Some governments issued "Protections" against impressment, including Britain. These were mainly issued  by the Admiralty and Trinity House for specific types of employment. These protections had to be carried at all times and shown to the press gang on demand to prevent the holder being impressed. However, in times of crisis, even the protections became invalid. The order "press from all protections" - known as the "hot press" meant that no person was exempt from impressment.

Additionally, in times of war, other methods of recruitment were used. In 1795, during the French Revolutionary War, the Prime Minister, William Pitt, introduced the Quota Acts to supplement recruitment to the navy. This meant that each county in Britain had to provide a quota of men for naval service. The number of men to be provided was dependant on the county population and the number of seaports it contained. As an illustration, London was expected to provide 5704 men for naval service. To induce men to sign up, counties usually offered a bounty. However, this did not usually ensure the required number and counties had to resort to other methods of recruitment. Criminals, convicted of petty offences, were offered the choice of joining up for naval service (with the added incentive of a pension at the end of their service) or the normal harsh prison sentence for the crime committed. In some cases, the presence of convicts added to the navy's problems by bringing with them diseases that were rife in the jails and causing the spread of  disease amongst the crew.

Impressment was last used in Britain during the Napoleonic wars of 1803-1815. Although not used after that period, the right to use impressment was retained. In 1835, a statute was passed that exempted sailors who had been impressed and had served for five years in the navy from any further impressment. In 1853, the navy introduced continuous service for sailors who wished to make a career in the navy. After a fixed number of years, they would receive a pension. This reduced the need for general impressment and it died out in the form that it had been used previously.

However, in the twentieth century, during the two world wars, another type of impressment has been used in the form of compulsory national service or conscription and this type of service continued until the early 1960s.

From: the Royal Naval Museum Library, 2001