The next day, Martin carried the two barrels up to the old place, he hadn’t been there for years, but already he could tell that there had been a good deal of stonework repaired and a new roof put upon it. The old Lodge was beginning to look habitable again and the sailors were removing the carpets in teams of two and airing them in the sunshine as he pulled up.

An older sailor, who was busy about a cookfire, took a pot full of coffee off the flame and set it aside. Martin caught a better look at the fellow and noticed that the right side of the man’s face looked as though he had suffered a great blow, it was scarred and crushed in a similar manner of an eggshell. His eye was covered with a patch, and all the teeth on the right side of his mouth were missing. Martin approached him in regard to the barrels of beer, but when the sailor spoke, he was not able to understand him. His voice was gruff and he seemed barely able to form the words in his mouth.

“That’s Mr. Higgins,” Nithercott approached the two after having deposited his carpet upon the lawn, “He’s hard to understand on account he ain’t got no tongue.”

Higgins gestured to a spot near the sailor’s little camp and a group of men went about fetching the barrels off Martin’s cart. It was as neat a little camp as he had ever seen, the sailors had laid out several small canvas tents in a tight line in front of the house, and Mr. Higgins worked at a little kitchen at the end of the row that they had designed from some loose stones and boards found about the place. 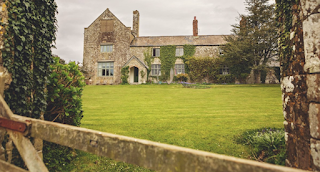 Higgins exchanged incoherent words with Nithercott, who seemed to have no trouble understanding, “Mr. Higgins would like to know if you would be agreeable to deliver two more of them barrels in three days’ time? We get awful thirsty sir.”

Martin agreed that he could do just that, and with the prompting of Higgins, Nithercott paid for the next delivery in advance. Higgins brought Mr. Martin coffee in a delicate cup and saucer which he drank with gratitude as the men began to remove furniture from the house and arrange it in the tall grass.

The sailors sent the boys down the drive with axes, and they were clearing away unsightly brush by the road as Martin drove his horse cart back toward the village.