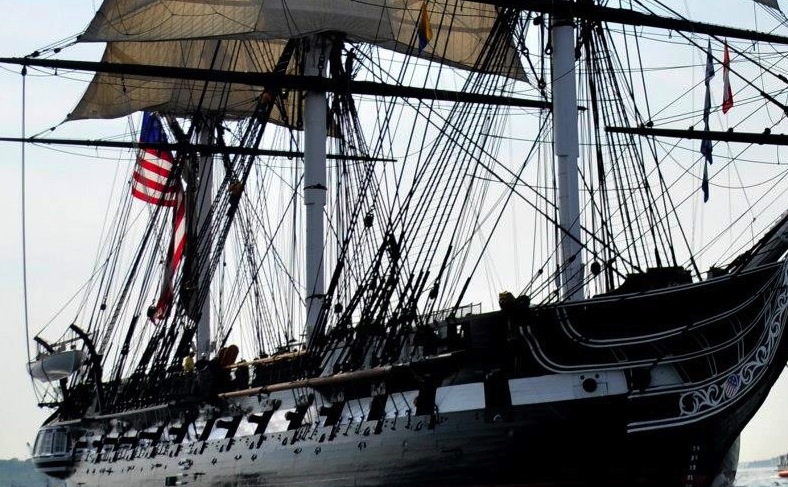 On the 11th of March, at 0 h. 15 m. p.m., when, as already stated, they first discovered the Constitution, Cyane, Levant, and cartel brig, the three British ships were standing close hauled on the starboard tack, with a moderate breeze from the north-east by north ; and the ships in Porto-Praya then bore from the Leander, the leewardmost ship of her squadron, northeast by north distant seven miles. In less than 10 minutes after she had discovered the approach of the British ships, the Constitution cut her cables and stood out of Porto-Praya on the larboard tack, followed by the Levant and Cyane. At 1 p.m., just as the Constitution had got upon the Leander's weather beam, the three British ships tacked in chase. At this time the strange squadron was about four miles in the wind's eye of the Acasta, the Acasta about one mile upon the weather quarter of the Newcastle, and the Newcastle about two miles ahead of the Leander. At this time, also, the Acasta made out the strangers to be " one large frigate and two sloops." The Newcastle has merely noted down in her log, that one ship was larger than the others ; and the Leander, in her log, describes all three of the ships as " apparently frigates." But the Leander's first lieutenant on the occasion, the present Captain John M'Dougall, has subsequently stated as follows: " Weather very thick and hazy ; took the two stern-most ships for frigates, the headmost, from appearance, a much larger ship, for the Guerrière; who, we understood, had long 32-pounders on her main deck." *

At 1 h. 30 m. p.m. Captain Stewart found that the Constitution sailed about equal with the ships on her lee quarter, but that the Acasta, by luffing up, was gaining her wake and rather dropping astern. It was at the same time observed, that the Cyane was dropping astern and to leeward, and would soon be overtaken by the Acasta. At 1 h. 40 m., therefore, Captain Stewart made the signal for the Cyane to tack ; expecting that the British commodore would detach a ship in pursuit of her, and that she would succeed in reaching the anchorage of Porto-Praya before the detached ship could come up with her ; or, if no ship chased, that she would be able to double the rear of the British squadron and escape before the wind. The Cyane, just when bearing from the Leander north-north-east distant four miles, tacked accordingly ; but no British ship tacked after her, Sir George rightly judging that she would reach the neutral port before either of the British ships could get within shot of her. The Cyane shortly afterwards bore away, and was seen no more. At 1 h. 45 in. the Leander hoisted her colours and fired a gun to windward; and then telegraphed that, in case of parting company, the Isle of Mayo was to be the rendezvous. Both the Leander's consorts also hoisted their colours, and the Newcastle scaled her guns. The Constitution's log notices the circumstance thus: " The ship on our lee quarter firing broadsides by divisions, her shot falling short of us." An officer of the Constitution, in a letter to a friend, says : " The shot fell short from 100 to 200 yards. " † This would, indeed, have brought the ships near together ; but the American officer must have greatly underrated the distance. For our part, we cannot see the necessity of scaling the guns at all : not only was the concussion calculated to check the ship's way, but it was very likely to calm the breeze, already beginning to slacken as the day drew towards its close.

At 2 h. 30 m. p.m., the Constitution having dropped the Levant considerably, the situation of the latter, in reference to the Acasta, became as critical as that of the Cyane had been. Captain Stewart accordingly made the Levant's signal to tack ; and the Levant did immediately tack. At this time, says the Acasta, " the frigate had gained on us, but we had gained on the sloop." One of the Constitution's officers gives a different statement from that in the Acasta's log. He says:


"The Acasta sailed faster than the Constitution,
and was gaining on her."

At all events the Acasta, although she might drop a little astern, was weathering upon the Constitution, and had now brought her to bear upon her weather cat-head. The instant the Levant tacked, the Leander made a signal, the nature of which we shall discuss presently ; and, in obedience to that signal, the Acasta " tacked in chase of the sloop." In a minute or two afterwards, according to statements that have appeared in print, the Leander and Newcastle successively did the same. When the Newcastle tacked, the Constitution was five or six miles to windward of her, and, " in the prevailing haze, nearly out of sight " from the deck of the Leander ; from whom the Newcastle then bore south-east by east, and the Acasta north-east.

At 2 h. 50 m. p.m., which was just 14 minutes after she had tacked, the Newcastle lost sight of the Constitution, owing to the increased haziness of the weather as the former approached the land, and the opposite course steered by the latter. The Levant, shortly after she had tacked, bore away for Porto-Praya road, and at about 3 h. 15 m. p.m. received from the Leander in passing an ineffectual fire. " At 4 h. 30 m.," says the Newcastle log, "saw her (Levant) anchor. Acasta fired a broadside. At 4 h. 56 m. tacked and fired our larboard broadside." An American account says: "The Levant ran into port, so as to run her jib-boom over the battery. The Acasta and Newcastle came in, and, although her colours were hauled down, fired at her a number of times. They were obliged to hoist and lower their colours twice ; yet not a gun was fired from the Levant. Lieutenant Ballard, who commanded, had ordered his men to lie on the deck, by which they all escaped injury, although considerable damage was done to the town. It seemed unnecessary for two heavy frigates to fire into one sloop of war, who neither did nor could make any resistance." † When the Leander opened her fire she discovered, clearly enough, the force of the ship in pursuit of which the squadron had tacked. Sir George then made the signal for the Acasta to take possession of her. The Acasta did so ; and, by 5 p.m., all three British ships had anchored in Porto-Praya road.